If Then Statement Conversion from Alteryx to Knime

I need help converting an If Then Statement from Alteryx to Knime. I’ve tried the String Manipulation, Rule Engine, and Column Expression nodes but can’t seem to get it.

Which node should I use and what is the Knime syntax for the below expression?

Any help would be greatly appreciated.
Marie

Hi @mariesylvia and welcome to the forum.

To me this definitely sounds like a job for the Column Expressions node. You can read a nice post explaining the syntax of conditionals in that node here:

Hi, sorry that I missed this post concerning the Column Expressions node. In another thread (see here) I broke down the syntax of the Column Expressions and Variable Expressions node and how to use it. I’ve already mentioned that it is possible to use loops (for, while) and if-else statements. As previous posts already mentioned, you have the following syntax: if(**state**) { // do this, if **state** evaluates to true } else { // do that, if **state** evaluates to false } So this is…

Hi @mariesylvia and welcome to the Knime Community.

The Column Expression will allow you to do both conditions and manipulation.

The syntax to refer to a column in the Column Expression is with the column() function. In your case, if the column name is “Loc Num”, you have to reference to it with:
column("Loc Num")

Thank you both for the clarification on using the Column Expressions node.

I have been trying to construct my formula using the syntax mentioned but I’m still getting errors. It would be helpful to see how the below formula converts to Knime as I am pretty new at this.

Hi @mariesylvia , as I mentioned:

The syntax to refer to a column in the Column Expression is with the column() function. In your case, if the column name is “Loc Num”, you have to reference to it with:
column("Loc Num")

So, one of the things to correct is that instead of using [Loc Num], you have to use column("Loc Num") when referring to the column “Loc Num” in Column Expression.

For syntax for if…else, you can refer to the resource that @ScottF has provided.

Hi @mariesylvia , you can check the workflow I provided in this other thread where I am using a Column Expression with if else if, and with join() which pretty much covers most of what you need.

Hi @lenexa_jayhawk , there are quite a few ways to do this in Knime, including using Python. But based on what you wrote, it looks like you want to “better understand workflow development and understand equivalencies”, meaning you want something without Python, is that correct? I present to you 2 ways (they are more or less the same - I’ll explain a bit further): [image] First of all, I defined the lower and upper bounds as variables (0 and 100) in case you want to change them when you are p…

Hello, I’ve been playing with this for a couple days now and it should be so simple but no matter what I do, I cannot get it to work. Thank you for all the help though. It is very much appreciated!

Hi @mariesylvia , We can guide you. Can you show us what you have done so far?

@mariesylvia maybe you could provide us with some dummy data that would contain the tasks you have and also the outcome so we could develop a solution and you can check it. I am sure the forum will be able to help.

Would you do this for one specific column or several ones. Since KNIME is based on Java you always have the full power of Java at your fingertips. It might be a little bit of try and error first but you will then have the full range of options - and the KNIME forum is always there to help.

Contains several Java Snippet nodes that implement simple functionalities in Java. Java Snippets can be used to implement methods that are not available as nat…

Meta Collection about KNIME and Java As a platform KNIME is well suited to collaborate with all kinds of tools and systems, including Java. Collection of Java …

Hi
Attached is a sample of the data.

Also, below is the formula from Alteryx that needs to be converted to Knime

Thank you for all the help and information.
I’m not very familiar with java but below is my latest attempt at the formula using the column expressions node. I know there are several errors but was hoping someone could help troubleshoot.

Hi @mariesylvia , both @ScottF and I could have written the correct Knime code for you in our initial posts, but the idea was to guide you enough for you to figure it out. That way you would know how to translate other future code

I’m glad to see that you are trying to get the correct translated code, it’s almost there

So, a few corrections to apply to your code:
i) if conditions should be put in brackets. For example:
if length(column(“Loc Num”) <= 7)

ii) An if statement can only have 1 else. It can, however, have multiple else if. The else is basically the default operation when none of the if and else if are not satisfied. It should be last. This is the same for all programming languages, and same as what you have in your Alteryx code.

The basic template would be:

Note: Parentheses are not necessary when you have just 1 operation, but it is good practice to use them. I’ve seen coders do this:

They would comment out the operation part as a way to skip the if statement. However, they would not get the expected results, and would go nuts trying to figure out why. The issue here is by commenting out the operation, the <some other code> part now becomes the new operation, and now instead of always executing the <some other code>, it’s executed only if the if condition is true. With parentheses, you avoid this issue

<some other code> remains outside of the if and will execute no matter the if condition.

Note 2: Single line if statements are also accepted, like you wrote in your code.

iii) Lastly, there are a few operations that you are performing that are invalid in the Column Expression, at least it’s not the proper command. For example, you cannot use LIKE or MISSING or Empty (these are valid in other nodes). The correct replacements are actually functions that are close to what you use in your code for Alteryx.

To see what the proper function names to use, you can view the list of the functions from the function dropdown as I mentioned before. This is what I am referring to: 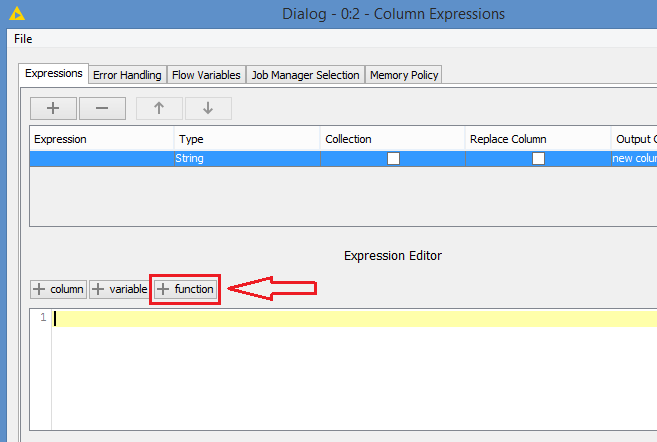 When you click on this, you get a dropdown with all the functions that are supported. You even get a brief description of the function and how to use it:

You also don’t need to type the function in your code. You can just double click on it from the dropdown and it will appear in your code.

Similarly for accessing columns and variables, you can click on these: 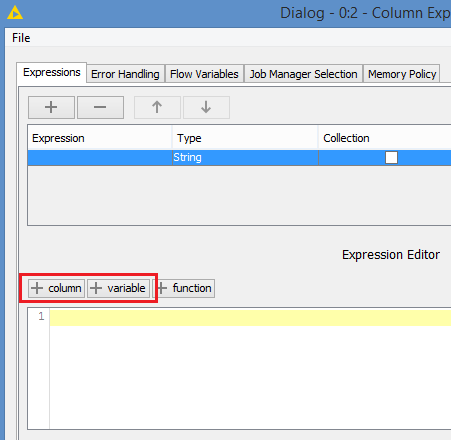 So, for your function contains(), you can use contains() in the Column Expression. It’s the same function.
In terms of missing and empty, if I’m not mistaken, they mean the same in Knime, and can be checked using the isMissing() function
And your Length() function is the length() function in Knime.

FYI, these 2 elseif from your original code:

can be merged as 1 elseif like this in Alteryx:
elseif IsNull([Loc Num]) OR IsEmpty([Loc Num]) then “”

So, can you correct your if statements based on these instructions?

Thanks to all your help and guidance, I was able to figure out the formula!

I really appreciate everyone’s support and patience.
It is amazing to have such a friendly, helpful, and responsive community!
Thank you!

Looks good to me @mariesylvia

EDIT: Just a note (and that’s applicable in Alteryx or other languages too):

Thank you for the helpful tip and again thank you for all your guidance!
I appreciate you having me solve it myself and providing guidance along the way rather than giving the answer up front. You were 100% correct that it really helps to learn how to do the formulas.