Joiner Configurations in a Component

I need to create a component that contains a joiner and provides in its configuration the ability to match up one or more join columns for the joiner. Any pointers?

you can try following. Use 2 Column Selection Configuration nodes inside component and choose you joining columns. This node will provide chosen columns as flow variable which you can use to control Joiner.

This works well (as per your joiner in a loop post) if the joiner columns in the two tables have the same names but I struggling with how to use this to connect two differently name fields especially if there is more than one join column?

I see. For Joiner to work like this you’ll have to modify your column headers to be same. Maybe you can use this workflow as inspiration

This workflow demonstrates how to use JavaScript nodes in interactive Component's view to match incoming headers with template headers we already have. Idea is…

Give it a try and if you’ll have issue I can give it a try. Sounds like fun

Ok, I have been trying but I am seriously stuck. Maybe I am trying to do too much by putting the column rename into the same component as joiner? 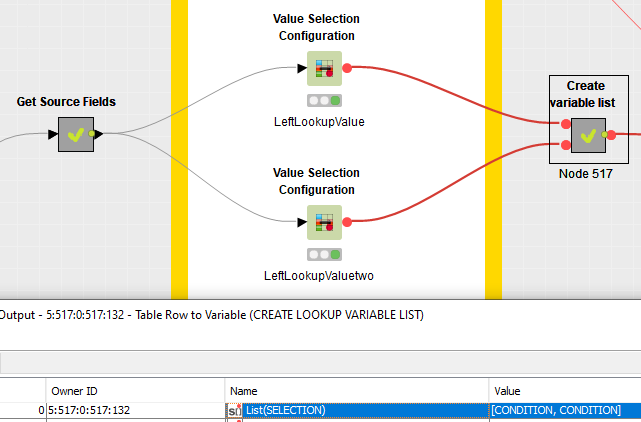 The left and right predicate are different in my case but the joiner still executes the left outer as expected.

Off course, the data is passed along while going through all these steps to actually perform the joiner. My example is now fixed to two columns whereby the righthandside is also fixed for the equivelant of these. But theoretically you can make this dynamic by letting the user define the list in the component config.

I do something similar for optional fields I want to query by added a string input in the component, that is also passed as variable ($${SConfigurationAddOptionalFields}$$) to the DB query reader and included in the data upon a joiner match.

Hopefully this helps a bit.

This looks great but I am struggling to follow how you set up the whole workflow from your pictures, would it be possible to share the workflow or the componant, please?

It’s company property in active use for customers so sharing it “as is” won’t be possible unfortunately. I’ll check if I can make dummy clone of it.

That would be fantastic if you were able to do a dummy. To be clear what I aiming for in the componant is the configuration that:

My go at a solution based on the above suggestions. Improvements most welcome
JoinerReportComponent.knwf (61.3 KB)

When I select two equal columns, the joiner should work right? I tried a lot of combinations of columns and the components always returns no result here because of the If switch. 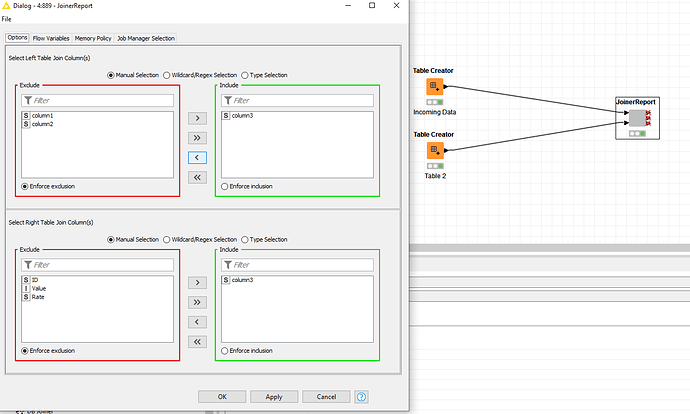 Only when I changed the first Rule Engine from FALSE to TRUE it started to work. If I understand it properly, you want to halt the flow whenever no column is given in the input because in the second rule engine you set that it should go top when the missing count is >0.

Also, the joiner uses the same variable for the RHJoinColumns twice rather than the LH.