so you can see examples from KNIME Explorer but you can’t open them or save them? Sry but not sure what download means in this case

Thanks I checked the The sxample worklow and able to raed files from s3 and have trying to create below workflow, but in JSON reader node getting error-“Invalid file system path: Illegal char <:> at index 2: s3:/…/wf_json_677.json” and this path I am not able to edit as I update the variable in the node it is updating bydefault.how can I fix this error?

you need pre-signed URLs. See your thread Read JSON File from s3 bucket and the hint from @thor. I think you need a Amazon S3 File Picker Node between Node34 and Node36.

As per the suggestion, I have used S3 file picker node in between the Node34 and Node36, even after preassigned URL which is stored in s3PickedFile variable and in next JSON node I am reading this variable -S3PickedFile but when trying to execute it gives error-server returns 403. Is the URL not generatimg proplerly. Am I picking up the correct variable ??? 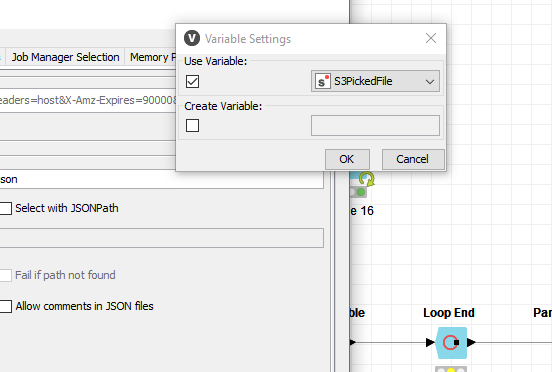 what kind of message get you, if you are using the link with e.g. curl?

No Idea about curl But I believe the URL created in variable s3PickedFile is not correct which is why it is failing but file listing is node is executing properly eventhough I am configuring the same way folder I am doing in FileListing node… see below screenshot.

sorry for my late response.

I checked your workflow with my AWS account and it worked fine.

I think a different is the flow variable for the Amazon S3 File Picker Node. I’m using the /bucket/filename.json string without protocol, accesskeyid and region.

Is this a solution?

Hi @Andrew_Steel,
Thanks for the update. Yes this is a solution .

But for me when try to read the file in json with the path starting from /bucket/filename.json, automaticaly it is adding C:// and trying to read it from local system and then i get there is no valid file. May be I am doing some wrong configuration.
Workflow steps for flow variable like:

I am missing something, not sure what .If you can help me ?

No, that’s wrong. There’s a “s3PickedFile” flow variable that must be used for the JSON Reader

Then it should work.

Thanks for your support, now after the json data is parsed into table A through KNIME and then I fetch data from Database table in which developer has parsed the the same json data into table B(in database). For verification , I want to compare the data in table A and Table B though KNIME, I want to compare the data in in each column , how can I do that , Is there any Union node available in KNIME?

use the Table Difference Checker. Install the node from the package KNIME Testing Framework.

I am looking for some solution on below doubts, it would be helpful if someone can give any input. thanks in advance

1)Thanks I have installed the node and it is working as expected , but the node is an assertion , means if the data in two tables does not match the node execution fails otherwise if all data matched the execution is successful but there is no output report/data. Is there a possibility to get the some report/ data which specifies that number of records/data matched or unmatched?

I have tried using ungroup for Flgs parameter as Node 15 in the picture but it is creating new rows equal to the number of Flgs elements present under each PsnameId , which is not the expected output. Can you please let me know if we can use any node or do we need to use some coding to achieve this.

This is again related to some change in JSON format.
Attached is the sample JSON ,
which has 1 new parameter-Flgs of array type having parameters- Cd,Des,Type and there can be maximum of 10 number of Flgs per obserts so here in the eaxmple
obsert1 has 2 Flgs ,obsert 2 has 3 Flgs , Obsert 3 and obsert 4 has null Flgs.
since we have row for each obsert, after parsing obsert1 row should have data in 3 Flgs columns like cd1,des1; cd2, des2,cd3,des3, and cd4,des4 to cd10, des10 should have null data.
So here we want to to have data in columns for Flgs array and not splitting into rown which can be achieved through JSON path and ungroup. So can u guide me how cam we achieve this through KNIME. mysample12.json (2.2 KB)

a brief question … should the flag values fill the columns sequentially, always starting with the 1st flag column? And the following empty columns should be filled with null or missing values? Or is there a sequence from the value of the flags? You write A1, A2 … B1, B2, B3 … is the number part of the value the number of the sequential column?

you will start at an earlier point, I already start with the Obserts-Array in the JSON Reader. 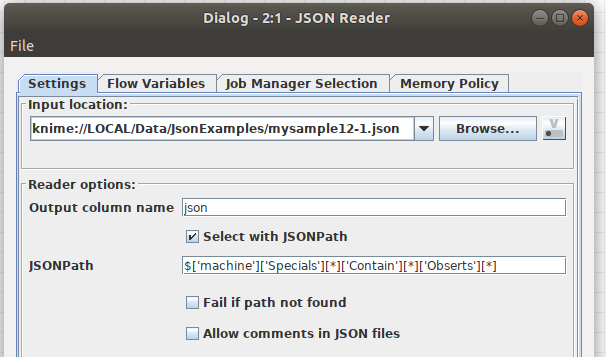 Then I extract the array with the Flgs with Cd values 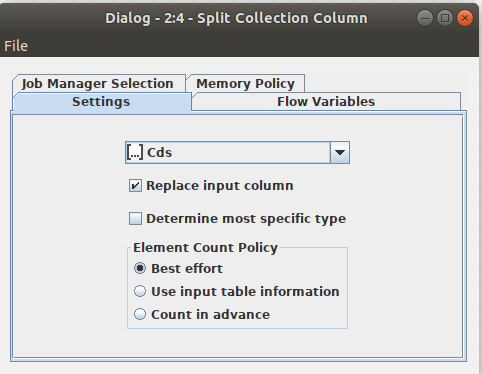 At the end I get a table with rows per Obserts and columns with Flgs.

3 nodes for this solution …

I hope it helps.

welcome to our community!

But in your JSON text you use wrong double-code characters. I don’t know if they are from the Mongo DB or from the KNIME forum post.

7 posts were split to a new topic: Get week number