Knime PATH does not match to system user PATH Variable

for quite some time, interrupted by the sudden decommissioning of NGS (in particular the Bash Node), I attempted to resolve an issue in details explored in:

Hi there, the Bash – KNIME Hub form the KNIME NGS tools – KNIME Hub works well on commands like curl. However, other commands, which can be executed w/o issues directly in the terminal, like the following, cause an error to be thrown: “Execute failed: Cannot execute command” nmap -v -F google.com Does Knime has its own file which references executables? I checked the preferences but could not find anything, though. Best Mike

It is, based on what I know, untested on other systems (Windows / Linux) but only on Mac OS.

I will update the workflow soon incorporating the Python approach as well.

Update … As identified by @carstenhaubold in:

. Learn something new every day they say…

This seems to be a security feature of OSX. When a program is started normally, meaning by double clicking the application or calling it via Spotlight, the PATH variable is cleared out by OSX. However, if you start KNIME from a terminal, you can make it inherit the full environment like so: navigate into your KNIME application’s Contents/MacOS folder with the terminal, from your output above this seems to be /Applications/KNIME.app/…

The issue is caused by “security mechanisms” of OS X. In order to circumvent / expose the users PATH variable, knime must be started via command line by:

However, this comes with a not so insignificant disadvantage as the terminal must, under any circumstances, being kept open. If close by accident, knime is immediately stopped (not properly shut down).

Adding to this. the start up window seems to not list the loaded / installed extensions. However, they are still accessible (bug or feature?) 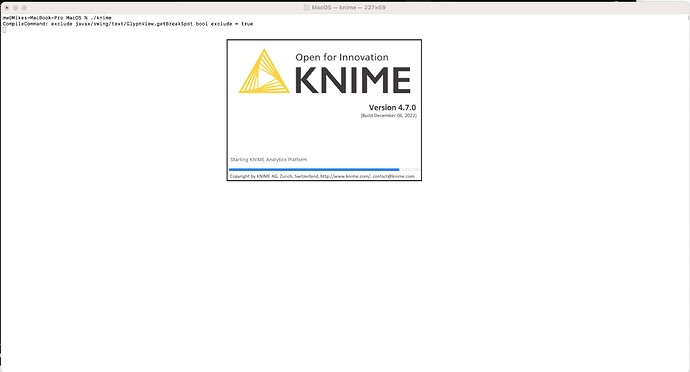 I’d like to propose to enable defining / overwriting the PATH variable manually in the External Nodes. Similar to how it was made possible by @AnotherFraudUser in AF Utilities (big thanks!)

Hi @mwiegand, @iCFO, took a bit longer due to issues with the node deployment. But I added a script execution node to the AF Utilities which hopefully covers at least the basic usecases from the BASH node [grafik] I added env-prefs to maybe also cover @mwiegand problem where you can change or add new enviroment settings used by the node (by default it reads all enviroment settings which are used by default) [grafik] But have to say did not use the old bash node at all - so things could …

Reason is, the “security” measure might get in this or another way implemented by other OS vendors too. The struggle which many had to go through to identify the cause would be easily avoidable but also would allow to add a significant amount of flexibility in defining binaries.

Hi @mwiegand ,
thank you for the extensive feedback. It was very helpful!
We have created an Enhancement request in Jira for this matter (#AP-20025).
Best,
Daria

You are more than welcome. The kudos however should go to @AnotherFraudUser and @carstenhaubold. Looking forward to test you improvements.

Quick question, though. You post has been marked as the solution but that is yet not available. It will result in this topics getting closed before a solution becomes available which could confuse current and future readers.

Since the solution is depending on a ticket / update, wouldn’t it be, for the sake of comprehensibility, an idea to link solutions not just to workflows but also version updates / nodes?

Thanks for the comments, @mwiegand !
That is a good point. We will mark it as a solution in the future, when it is avaliable.
Best,
Daria