Has anyone else experienced this?

Thank you for bringing this to our attention. I have recently received another ticket with the same error message relating to the SMB node and 4.6.0. I will raise another JIRA ticket to our development team to take a look into this.

As a note, .0 releases are meant to be versions for people to explore our new features and is not meant for production environments, so usually there are a few bugs that haven’t been fully patched just yet. With our .1 release of 4.6 most of these issues should be resolved. We appreciate your patience while we work on sorting out the 4.6.0 release issues.

this looks like a bug in the smbj library which we are using for the SMB Connector node (with AP 4.6 we updated the library version due to other bugs). We are unable to reproduce the issue on our end here and it seems to only happen with some SMB fileservers. Would it be possible to get precise info about the configuration of your SMB fileserver and/or some server-side logs? From the looks of it, the fileserver is closing the connection, but we have no idea why.

Hello,
Have you fix the problem? Today after I upgraded to 4.6.1, I met the same problem with SMB Connector node. I can’t even browse the directory. 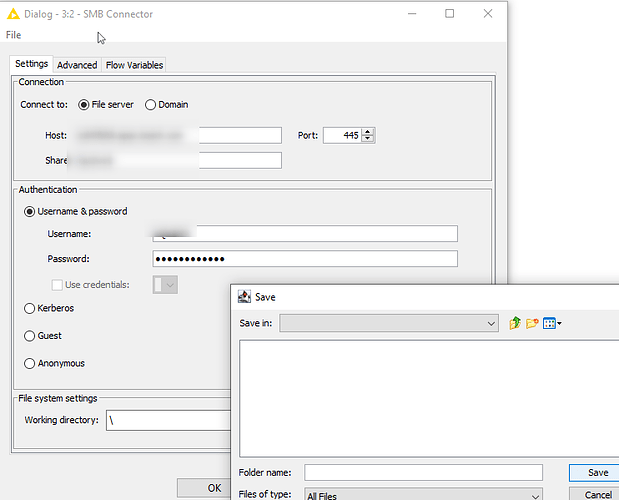 Hi, I am facing exactly the same issue.
Any update about the topic?

I downgraded that particular set of nodes from KNIME Basic File System Connectors to 4.5.2 and got everything working. However, 4.5.2 has a dependency issue with KNIME Personal Productivity Tools, so I removed that extension and all is well

Hopefully they can figure out the fix

To this point at KNIME we are still unable to reproduce the issue as it seems to only happen with some file servers, e.g. certain NetApp appliances.

We did an upgrade of the smbj library update with 4.6.0 which seems to cause this. The new smbj defaults to using SMB3, whereas the previous version preferred SMB2. Our current hypothesis that this is causing the issue. We are currently adding a way to force SMB2 to the SMB Connector node, which will be released with AP 4.6.2.

Hello,
I had the same issue with SMB connector node after upgrading to KNIME 4.6.1 - but I can confirm that an upgrade to 4.6.2 solved the issue!
Unfortunately we will have to update our KNIME Server version as well