It sure would be handy if the Lag Column node output the lagged column name as a flow variable!

Hi @MrSampson and welcome back to the KNIME forum,

It is already possible to do that in the “Flow Variables” tab of the node’s configuration window: 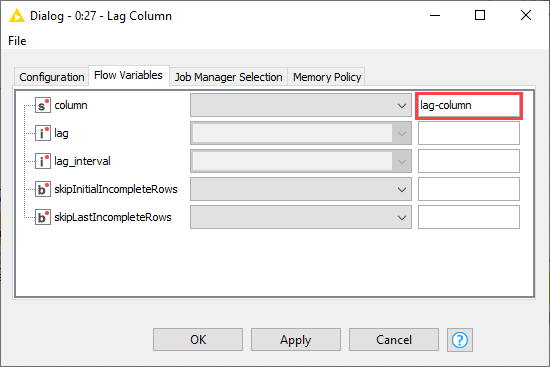 Thanks @armingrudd. I’m sorry I was unclear. I mean the output column, like the one with the column name as “lag-column(-1)”.

Right. And I can use the flow variable for the lag to fill out the column name, so I wouldn’t have to change it manually every time I change the lag. That’s why I suggested it would be “handy” by saving me the couple of mintues of doing that.

It’s no big deal, I just thought I would throw it out there. (Including an input field to change the output column name, would also be nice.)

if you are after to rename lagged column maybe this topic helps:

Rename in Lag-Node or Rename by Position KNIME Analytics Platform

I am using the Lag Column Node to get lag values. The problem is that I have to rename the column to fit to the naming conventions AND I do not know which column gets lagged since this is controlled by a Column Selection Configuration node. If there would be a rename config within the Lag Column I could use this (=> Feature Request) If there was any way to rename a column by position, I could do the renaming directly after producing the lag since the lag column is always appended to the righ…