Hi,
this bug (?) almost drew me crazy. Using KNIME 4.3.2 I created a (Long) flow variable within a loop and wanted to access it in the “DB Query Reader” but it was not shown in the “flow variable list”. On the other hand it was show in the flow variables tab.

After some testing I found out that the data type seems to be the problem. If I convert it to String it is shown in the “flow variable list”.

Here are screenshots of the workflow: 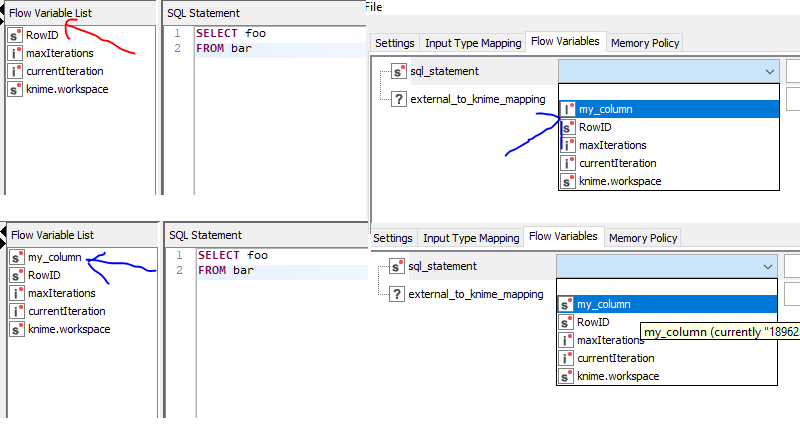 Is this the desired behavior?

there is already a ticket in system for DB nodes to support new flow variable types (see here). Your request has been noted. Someone will update this topic once there is news.

I’ve just noticed the same problem, not with a DB node, but with a Math Formula node, the last part where I’d expect it actually: 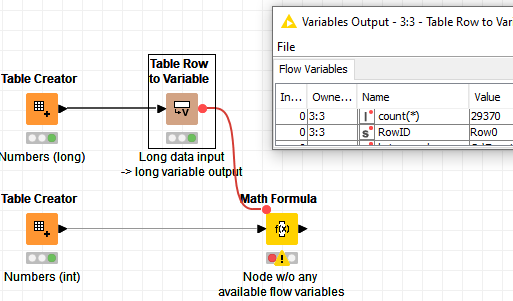 It would work if I fed the Long values as data into the Math Formula node and the Integer as flow variables. So Long values don’t seem to be the problem per se, but Long as variables.

Math Formula node together with mentioned variable nodes don’t support new flow variable types yet. As you figured it out you should convert Long to Int before turning it into variable. Have noted your request on corresponding ticket and once there is news someone will update this topic.