Looping over a String Replacer or Row Filter

I have a list of sentences in a column which I want to remove from documents or contents. I tried the dictionary filter or stop word filter but however, it seems like it only can remove single words but not sentences.
Now I use the string replacer node and replace the sentence with empty string but because I have more than one sentence to remove, I am trying to loop over the rows in a table with the “Table Row to Variable Loop Start”, but my problem is, every iteration starts from the original input and not the replaced content, so the result from Loop End is not what I wanted… I am not familiar with the Loop nodes, how can I loop over the output of the String Replacer?

Here’s an example workflow that might help. Instead of looping, it uses the Dictionary Tagger node to apply a Multiword tag to your sentences of interest, then the Tag Filter node to remove the sentences from your documents. 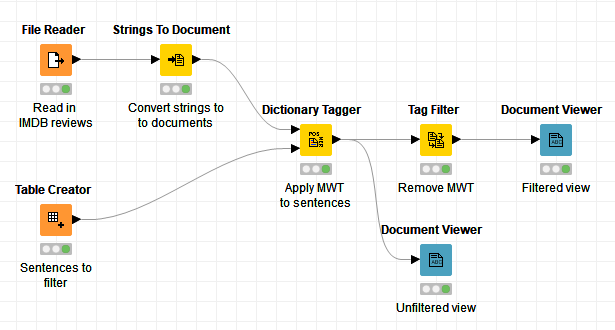