Merging multiple columns based on a criteria

Table1743×160 25.8 KB
The criteria is simple: if a row ID contains a missing value in the first set, then the value in the second set of columns is used, otherwise the value in the first set of columns is used.
Column merger does this perfectly. However, the column sets are hundreds and the primary and secondary columns have to be set for each individual merge. I would like to use this workflow for several different initial data sets (same lay-out) so wish to avoid having to configure multiple Column merger nodes each time.
Does anyone have any suggestions?
Thankyou for your time,

not quite sure if i managed to solve your exact problem but attached an example workflow for three variations.
One which returns the whole SetB if all columns of SetA are empty else return SetA
The other variation checks Col1 in SetA against SetB, Col2 in SetA against SetB,… and returns for each step the column of setB if setA is missing.
The last variation returns setB is any column in setA is empty

Sets can be defined by a 1or 2 nodes either by manual selecting or wildcards: 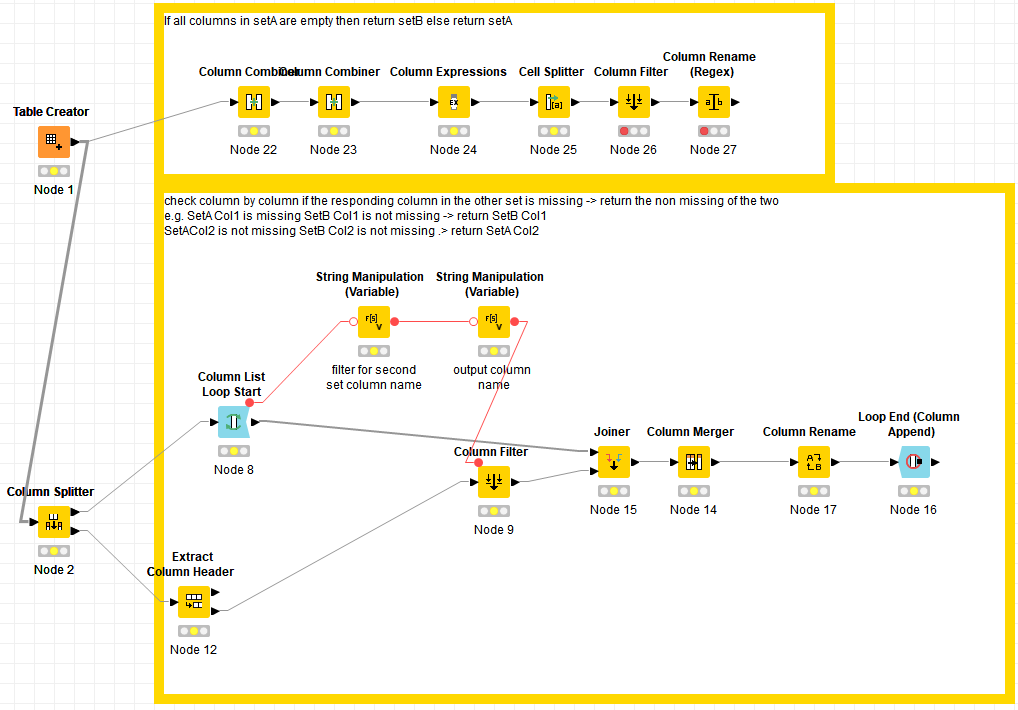 Many thanks. I will definitely try your suggestions!

Hi AnotherFraudUser.
Variation 2 is what I would like to use.
However, the way it is currently configured the output from the loop (collected results) is all set B, without any substitution with values from set A where present which, is the desired result.
I’ll work on it, but perhaps you will be able to see where the problem lies more quickly?
Regards,

That’s all right, got it!
I just switched the order of columns in the column splitter and option 2 works just fine!
Many thanks for sharing. I’ve learnt several important thing today!

Great that it at least got you near the solution