…and can someone explain to me how the “Moving Average” node handles missing values? 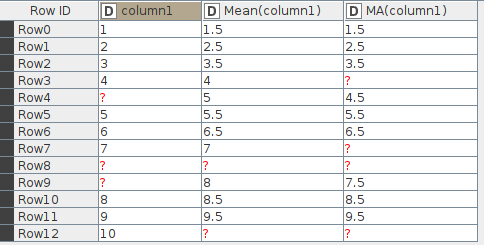 Take a look at the description of the node.
br

I am often guilty of scanning the help text too fast, but…

The only vaguely relevant part of the help text is this: “For all window based methods … the cells that do not have a complete window (at the beginning and the end of the table) are filled with Missing Values.”

Where the missing value at the end of the table comes from is obvious. This is identical for Moving Aggregation and the Moving Average nodes. It makes sense. 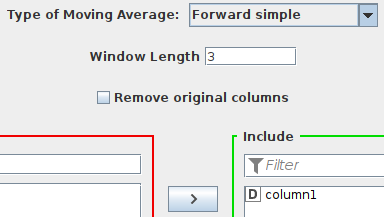 I simply don’t get it.

Here’s what I think is going on.

The mean aggregation in the Moving Aggregation node doesn’t allow for missing values. It calculates the mean based on the number of values actually present. So with a window size of three, this looks like:

On the other hand, the moving average node is different. The forward simple moving average doesn’t like the final value in the window to be missing, so it would return missing for those rows. That takes care of the 3-row windows starting on Row1, Row2, Row3, Row7, and Row8.

After checking the last value in the window, if there are missing values at the start of the window, then the node disregards those rows. They no longer exist; this is the case for Row3, Row4, and Row5

Once all of this is done, it finally calculates the forward simple average of the nth row as:
1/windowSize * sum{value_n, ... , value_n+windowSize-1} 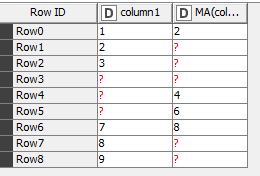 If you remove the rows with missing values before using the Moving Average node, you get basically the same result, without all the intervening missing value question marks in either column.

Hmmm… okay. Still, the behavior is a bit funny.

The gap in the data travels up even for “Center Simple” with a window length of 3, while the centers of the data chunks (the numbers 2, 8 and 14 in this case) stay put.