Below is what I have so far but I can’t figure out how I can introduce a loop with a second variable which I can feed into the String Similarity node to do as I have explained above - but maybe I am approaching it wrong. Any help would be appreciated.

I think something like this should do what you want: 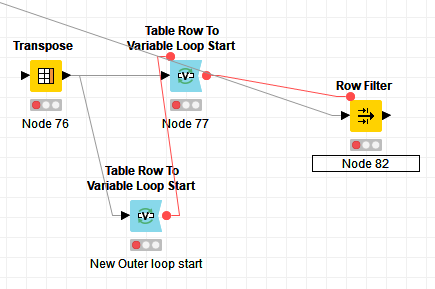 You need to make sure that the flow variable output of the outer loop is attached to the input of the inner loop in some way otherwise you will get errors about loops not being fully nested, or very strange behaviour if it does run ok

Thanks for the reply.

I did try that but I’m finding that even though I seem to have 2 variables coming out of the output port of the second Variable Loop Start, when I try to setup the String Similarity it only has 1 Column Header available. 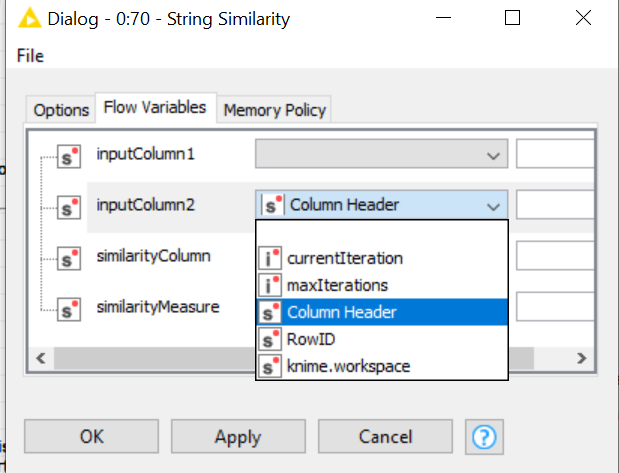 That’s a bit strange - I would have expected to see a duplicate variable from the outer loop with something like (#1) as a suffix.

I was expecting the same. In the end, I managed to make it work by combining the Variable Row to Table Loop with the Column List Loop Start. This resulted in two different variables which I could use as my inputs into the String Similarity node.

Maybe there was a better way but this worked.

to avoid mess in your workflow and a double loop you can try following:

Welcome to KNIME Community and hope this helps!

Thank you Ivan - even though I was able to make it work using the double loop, this is much cleaner and is exactly what I was trying to accomplish in the first place.