I am experimenting with the new List Files/Folder node. I would like to dynamically set the folder (e.g. UNC path on Windows and substitute with local mount point on KNIME server linux).

The idea is that I somehow either connect the new optional File System Port with the right folder which I would generate in the workflow. Or that I use the option to specify the path via variable.

Both is not working:

I tried to use a JAVA node as I though it was more flexible to create a type P, but the node can only output string, double, int…

Can anybody help me to explain how I could set a dynamic path into the new List Files/Folder node. 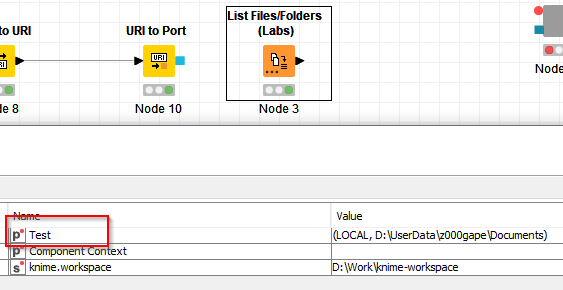 I think if the path you are trying to point to is part of the Server, you can use the relative option in the list files/folder, and put it relative to your workflow, for instance.

Thanks Ana for your explanation.

Yes, I got the concept of the different types and I fully understand that light blue and dark blue ports are not the same.

Thanks for pointing out the Sharepoint node that creates a dark blue port. Are there any other nodes around which allow me to create a port for a local file system or network share? That’s what I would need. A relative path does not work as on the server it will be relative and on local execution it will be a network path (\server\share\file…).

Thanks for any hint!

if you want to give it a try already you can download the KNIME nightly build containing a several nodes that allow you to create those flow variables.

Thank you Mark, I am curious to see this!