Greetings! I’d like to suggest a Table Column to Variable Loop Start Node to be added.

At the moment, there is only Table Column to Variable Node. 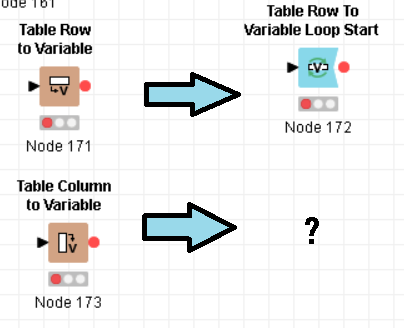 Hi @badger101 , what would the expected behaviour be for a Table Column To Variable Loop be? And what would be the use case?

In the sense of “complete the pattern”, I agree it’s logical to add a Table Column To Variable Loop Start node. It would iterate over columns, using the RowIDs as names for the Flow Variables. This is where I see the added value diminish though:

A possible workaround would be to Transpose the input table, then use the existing Table Row To Variable Loop Start node. If all columns have the same data type, this should be no problem. If not, then you’d have to deal with changing Flow Variable types with your proposed node.

As Bruno already mentioned, can you argue your use case? Why does Transpose + Table Row To Variable Loop Start not work for you? We might not see what you’re seeing. How would the proposed node make your life easier? =)

I could see how it could be a time saver if it had some cool column loop selection capabilities built into it. Like a column position pattern selector.