I would like to optimise the parameters of the SVR to get the highest R2 for my model. I tried to follow some tutorials here. But my workflow is still not working.

I put my trainer and learner between the strat and end of an optimisation loop.

Could you please help me to fix it?

can you upload an example workflow? That would make it much easier to help you because from your text I can only guess what might be the problem
If you don't want to upload your full workflow, just upload the part that contains the optimization loop, you can even replace your data with e.g. the ouput of a "Data Generator".

If that's not possible then I would check if you replace the right parameters with flow variables.

Hi Nemad,
I am trying to optimise the hyperparameters of the weka SVM run with cross validation.
I attached a part of my worksheet. I used data generator and I got the following error:
WARN LibSVM (3.7) 6:271 Unable to merge flow object stacks: Conflicting FlowObjects: <Loop Context (Head 6:323, Tail unassigned)> - iteration 0 vs. <Loop Context (Head 6:281, Tail unassigned)> - iteration 0 (loops/scopes not properly nested?)

I tried also with simple partition function(without cross validation) and it is not working too. I the flow variable I cannot see properly the parameters of the weka svm nd also they seem to be all strings. 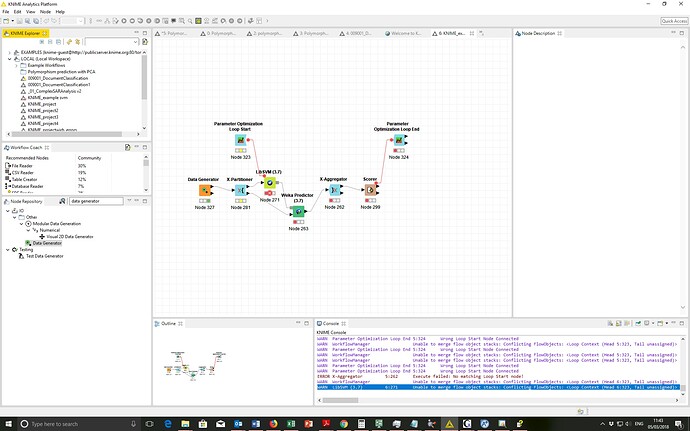 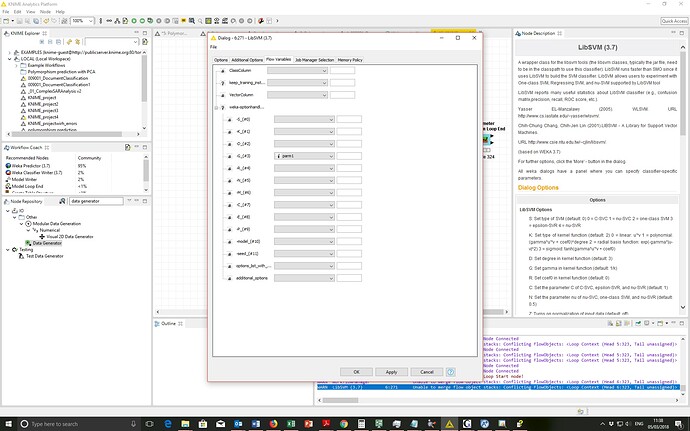 Hi again, with some try and test. I managed to get it run but I am not sure if the workflow is correct in this way. I attached a picture. 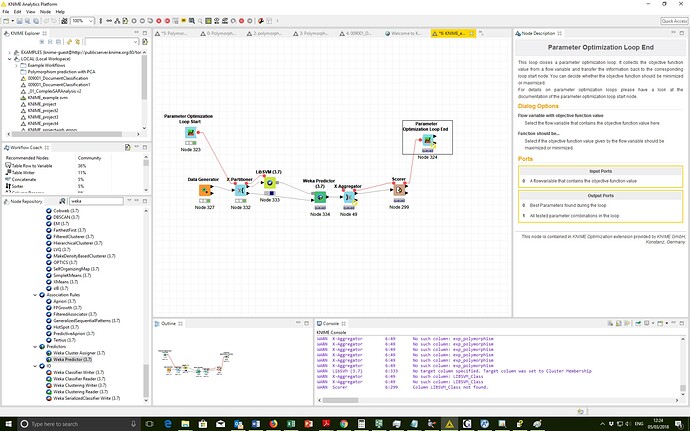 Hi zizoo, yes this why it should work correctly. Loops is Knime need to be opened and ended in correct order. eg. inner loop must end before outer loop.

Hi again,
I adjusted a bit the workflow as shown below. I practically added a row and a column filter to get the value of the accuracy of the average from the cross validation. I am not sure which one is correct.
I found a difference in the result of the optimization end loop. 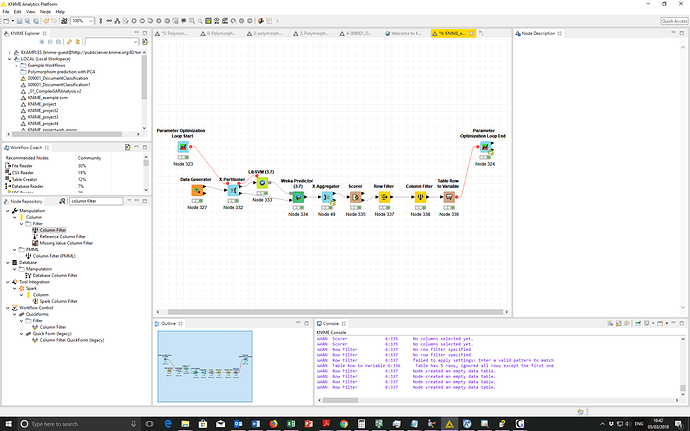 what’s correct really depends on what you want to achieve.
But I guess your goal is to find the parameters that give you optimal accuracy of your model, in which case your workflow is correct.
Just a quick note: You actually don’t need the row and column filter because the Scorer node already outputs the accuracy as flow variable. Simply connect the Scorer with the Parameter Optimization Loop End via the red flow variable connection and you are good to go.

Hi, @nemad,
I got problems with the SVM optimization loop. Can you help me to configure it correctly?
I am working with some Covid’s data on my state, and I try to find out if one (or more) of three regional epidemiological rates can serve for predicting effects on a specific market. My goal is to compare the predictive performance of a few algorithms.
I have 6 possible classes for real metrics collected in a survey, and predictions should also fit in one of the same 6 classes. Input data are stored in this XLSX file:
Help with PpredictionsClassifcations.xlsx (9.7 KB)
I built a workflow as follows:

I applied on it the RBF kernel and added its two parameters: a) sigma; and b) Overlapping penalty.
But it is not working properly. This is the Confusion Mattrix I got:

Of course, the only “right” predictions fit in the due class just by chance. My “real” accuracy is “0%”.
I have also manually tested it with a series of different ranges of values (from very tiny to widely broad spectra), with and without the loop (Parameter Optimization Loop Start / End). Predicted values are classified chiefly in just one class, and I can’t find a better configuration for this loop and prediction/classification, which are stored in this XLSX file:
Help with SVM Predictions.xlsx (6.2 KB)
Can you help me with this task? Any help will be greatly appreciated.
Thank you.
B.R.,
Rogério.
P.S.: sorry for reviving such an old post, but no better idea came to my mind.

There are a few things that I don’t understand:

All in all it is hard to tell what is going wrong from just the snippet you posted. Is there any chance that you could share the workflow?

Dear Adrian,
Thanks for your help. Indeed, You have already helped me a lot of times, with many other posts on which you helped many other beginners such as myself. Now, some answers to your questions:

Thank you once more for all your help.
I wish you all the best.
Bye.
Rogério.

Hello @rogerius1st,
first of all, sorry for the late reply, I was on vacation last week.
Thank you for posting your workflow, that makes it so much easier to figure out what is going on.

Hi again, @nemad.
Sorry for my late reply. And thanks a lot for the enlightenment. I suppose I haven’t learned (yet) how to use most of Knime’s nodes properly.

Thanks for any help you can lend me.
B.R., Rogério

the surface plot is a great idea to visualize the optimization!
However, there might be a bug in it because the accuracy should only take on values between 0 and 1.

Those optimized parameters generated the maximized accuracy of 76.34% on the Confusion matrix, but I got (on the same run) the value of 0,782 clicking on the 'Best Parameters" of the Parameter Optimization Loop End node. Shouldn’t they have the same value? Otherwise, which one should I use?

That is indeed odd. Can you perhaps send me the workflow that produced this incoherence, so that I can figure out if there is a bug on our end?

But I got no additional data for validating my models (on other data different from training and testing).

That’s where cross validation can help you. You would split your data with the partitioning node to get a training and a test set. Then you use cross validation in combination with the Parameter Optimization loop to find the best parameters and then train your final model using the full training data and apply that to your test data to get a less biased estimation of your model on unseen data.

I tried to adapt the @paolotamag’s example (for Cross Validation) that you had linked, though I think I need some help with this adaptation (or translation). Would you?

In your case you will want to replace the ROC curve with the Scorer to calculate the accuracy and collect it with a Variable Loop End node instead of the Loop End node that Paolo uses in the example.

Hello there @rogerius1st
Did you check there the Parameter Optimization (Table) component by @k10shetty1 ?

This enables you to drag and drop functionality and perform parameter optimization with minimal configuration.

The component has settings that expose you to the right level of detail.

For more examples and explanation take a look at the following resource.

Keerthan is an expert on this topic and co-author of the blog post: 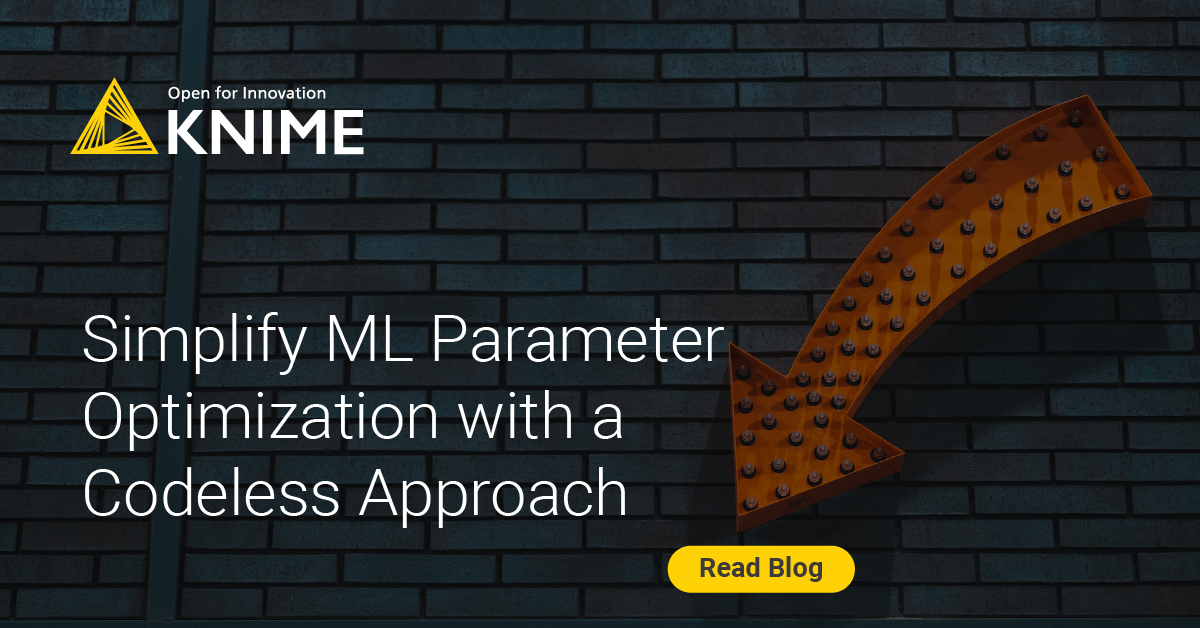 Simplify parameter optimization for machine learning classification with a codeless approach in KNIME.

and of this example space:

Dear Keerthan @k10shetty1
Thanks for all your support. I (tried to) study all the material available in the sent links. And tried to apply that ‘Component’ in my situation. I didn’t get good results yet, probably for not properly understanding them. I tried this Component for comparing the performances of five classifications in algorithms. I received ‘error messages’ in most of them:
-k-NN:

If you can help me, it will be greatly appreciated.
Thank you
B.R.,
Rogério.

I ran your workflow and would make the following changes:

Thanks for sharing @paolotamag .
Why is the bottom workflow captured? I do not understand the reason for this. Can you elaborate
br

Simplify parameter optimization for machine learning classification with a codeless approach in KNIME.

probably not detailed enough I just rushed quickly over. To me it looks like the optimazation is learned in the “train full model part” so I assume this is the part which needs to be captured
br

Dear Keerthan,
Thanks for your direct (and detailed) answer. Thanks for your comments, and special thanks for the (uphill) task you probably had while working on my KNWF.

I updated my workflow based on your suggestions (where possible, increasing the step size) – as far-reaching as I could understand the specifics of your changes. I send you (attached) my new version of that workflow.
WF_answers_to_Keerthan 1.knwf (1.9 MB)

Thou, I’m feeling compelled to comment with you a few things I couldn’t reach:

Opening the Component, I also saw that almost all SVM predictions (except by 4 from 55 instances) were in the same class (= “0.1”). So, I guess the real accuracy was “0”, because some original instances belonged to that class, and this coincided with the class to which a few points were assigned to this class just by chance. What could I do now to fix that?

b) on k-NN (testing k values in the interval {2; 20], the accuracy attained was 0.273 (for both 2 and 3 nearest neighbors). After these results, I applied the ‘Line Plot’ node, which rendered this graph: 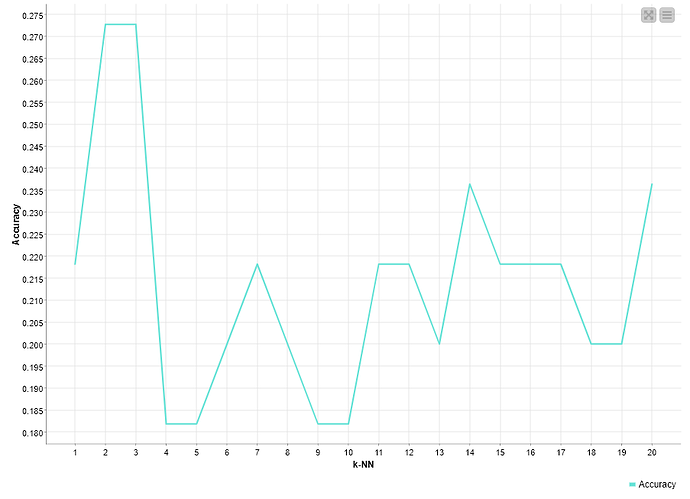 The data classification in this matrix was somewhat strange. Data seem to be fully dispersed along it, which leads to the supposition that the “right classifications” were generated just by chance. Does it look the same to you? In such a case, what could I do to reduce this data dispersion?

c) on Naïve Bayes (NB), (almost) everything was different.
That happened when I was trying to follow your suggestions. Then, I’ve increased the step size, according to the below table:

Thus, my “best results” were remarkably different from the ones I got before:

Then, I opened the Component and selected “All parameters” (on the “Parameter Optimization Loop End”, and I saw that the accuracies were equal (= 0.709) for all 10 parameters.Are the Naïve Bayes’ results so different from the former ones?

d) on MLP, I applied the following (as you suggested):

And got these results (= 0,7717), which are somewhat similar to NB’s ones, but remarkably different from the remainder algorithms:

Would you mind helping me to understand such high differences?

And got these results:

The PNN’s accuracy (= 0.299) is somewhat close to SVM’s and to k-NN’s results, but once again very different from NB’s and MLP’s.

Can you enlighten me about what is happening (or should have happened)?

Thanks again for all your help.
B.R.,
Rogério.