Thank you all for your consideration reading this.
Here’s the situation:

May someone suggest tips on how to speed up this process if possible?
in the DB Writer I have set up a batch size = 100, it is using streaming (virtual chunks = 1)
I am worried about the chunks and the batch size skipping records, hence why I kept it low. (I tested both and when higher it skipped)

Thank you so much,
Kind Regards,
SD

It is very difficult to say what is going on. Could you provide us with more details especially about what kind of database you are using and where exactly the delay occurs.

If you have a streaming of 1 ? and a chunk of 100 could this result in a situation that would only write 1 line per operation.

And the way you have wired the loop it seems that the DB Reader is reading the (whole?) database at each iteration. Are you sure that is what you want or what is the purpose of the DB reader on the right.

Hi @mlauber71,
Sure!
I am using mysql database, Microsoft SQL Server,
As for delay, occurs when running, it has been running 24+ hours,
To be fair, I am running like a farm, 13 setups, 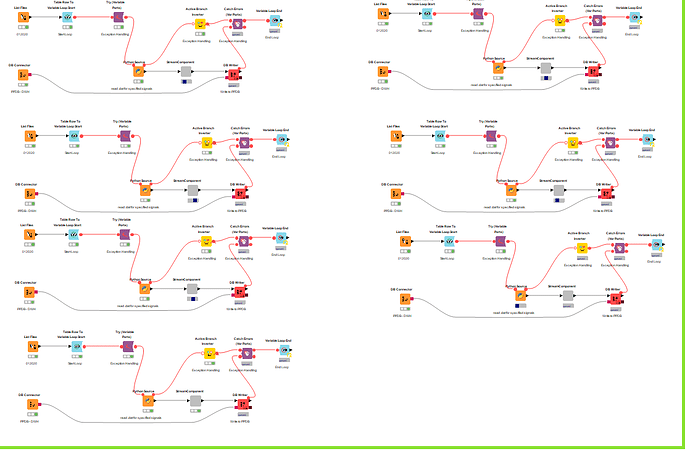 PythonTaskManager1180×156 9.58 KB
Python takes a lot of my CPU processing, (could it be my processing power?)

List files is reading a months worth of data, then python source picks out the needed info from the .dat file, then the component does manipulation to the data then it is written to MySQL DB as a table,

WOAH - so is that good or bad? Would a higher number skip? I just want everything accounted for,

Good point! I removed it, one less node!

Hmm difficult to judge from the screenshots. One idea could be to first collect all of your data locally and then load it into the DB in one single step.

Also if you have 13 parallel sessions accessing the DB from one account it may well be that the configuration would slow that down (only accepting a certain number of connections at one point) - another question would be the connection. How is the DB you are trying to write to connected to your system.

Then you mention you write to a MySQL DB. Is that a remote one or one on your machine. And what configurations are there.

In general you should think about your setup and reduce the number of DB operations to a minimum. You could see if certain calculations in KNIME can be done in memory - depending on your systems RAM.

You would have to identify which nodes cost the most time in oder to do something about it.

And here we have a list of discussions and blog entries about KNIME an performance. You might want to take a look if something strikes you as an idea to explore further.

A few remarks since it is difficult to judge from the screenshots: if you have to process that many files and lines it could make sense to do it in chunks and have some method in place to log the current status and be able to restart at a certain point. Eg. write results to disk after each 50 out of 900 processed files or something. Because if you do not have a very powerful infrastructure, compartmentalization might be a thing for you also this saving of steps in-between might function as som…

Will the large dataset be imported and the problems will occur later or do you experience problems also when loading data? If you have problems with import it might help to use the R library Readr instead of KNIME file reader. I know of no formal restriction for data in KNIME but it depends on how much power your system might bring. These points might be able to help you check out the links below with hints from KNIME and other information about performance with large datasets from CSV it mig…

you could try and increase the assigned memory in the knime.ini configuration file but with only 4 GB there are limits to that (https://www.knime.com/blog/optimizing-knime-workflows-for-performance). On other option is to set the “Memory Policy” of the (sorter) node to “Write tables to disc”. Obviously this increases the load on the hard drive but it might save on RAM. [image] Also you could try and close other workflows, restart KNIME an try to use the garbage collector. [image] [image] T…

You might want to check your virus scanner. On certain systems with quite aggressive virus scanners I experienced KNIME to be slow. Since it can contain several 1,000 single files an ‘agressive’ virus scanner might scan all of them every time they are accessed/opened. When we changed the settings KNIME started faster. Of course there is a trade off between security and speed. But modern virus scanners might be able to have a flexible configuration. But of course the number of AddOns and the ove…

That is certainly odd. To the best of my knowledge, there haven’t been any recent major changes to KNIME that are known to have a degrading effect on performance. From my experience, the most dominating performance factor in KNIME is the materialization of intermediate data tables on disk. Have you noticed the performance of your hard disk degrading independently of KNIME? While we have some performance improvements for KNIME in the pipeline, here are some small adjustments you can try out: Y…

Do you mean it is doing this? 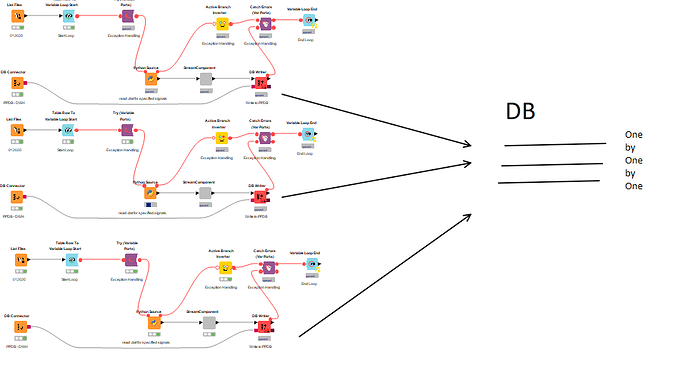 I have considered running one setup, it can read a folder for a year then the sub-folders which have months and inside the .dat files, it has the maxIterations combined, I thought maybe 13 setups would speed it up … sounds like i am doing the opposite?

It takes a while in the python source,

The MySQL is connected thru a connection source path

Thanks, I am still checking it out,

You mentioned this: “some method in place to log the current status and be able to restart at a certain point. Eg. write results to disk after each 50 out of 900 processed files or something.”
this is good,
how would you do this in knime?

Mostly agree with mlauber71 and we can only give general advice without knowing more.

In general: looping in knime = terribly slow and should be kept to minimum and loops small and simple. My experience at least. I would load only the data within the loop and do the rest outside of the loop. Second possible issue is the Python source. Simply said after you have your data it will have to be serialized and imported into the JVM so that knime can work with it. So if possible I would find a way to read the data directly.

And then of course the database itself matters (how it is configured) and how you connect to it. Especially with mysql I would check if you are using innodb or myisam. And what data are you writing? string and numbers or clob/blob data?