Physical Grouping of Nodes in a visual "container" ?

I would find it useful if there were an “official” way of grouping nodes, whether it be with an annotation, or some other “container” that would keep them together on the workflow. It’s a nice-to-have I know, but are there any plans for such a thing?

I’ve just been searching to see if anybody on the forum has raised anything similar to this, and I found a recent comment on this post, which is along the same sort of lines: Default Annotation Style

I know I can currently group nodes as a “metanode”. That has a place too, but then on my workflow I only see the metanode and no longer see the group of nodes themselves so the Use Case for that is a little different. I can open them on a different tab to the rest of the sheet which isn’t necessarily what I want. If I “expand” the metanode, so that I see the nodes in place on the workflow, then of course I have to remember to put them back into a metanode afterwards, so that isn’t overly convenient.

I think it is good to group nodes into boxes for visual documentation purposes, but then it would be good if you could move the entire group (and the box around them) together easily without having to explicitly select them all (by moving the container).

Linked to this, it is pain if you want to use Auto Layout - it currently doesn’t see annotations and so it doesn’t understand that the annotation and the specific group of nodes are in any way linked!

I admit though that if I had been working on a very large and complex workflow, I probably would not want to perform an Auto Layout on the entire thing. In that regard, as it stands at the moment, I would like a way of turning off the default behaviour of Auto Layout in that if I don’t have multiple nodes selected, it currently tries to auto layout everything". I’m pleased to see that if I select more than one object, auto layout works just on those objects (

), and I think perhaps it would be better if Auto Layout only acted on everything, if I had selected everything (using Ctrl A or equivalent) first.

My ideal would be that grouping of nodes and annotations were kept as two separate things. Then to group nodes, you’d highlight all the nodes you’d wished to group together, and select a “group nodes” command. It would then maybe give you options such as colour of box/background shading, and a caption and it would draw a rectangle around all the selected nodes. Annotations could also ideally be added to the group.

So that’s me just putting down a few thoughts. Does anybody else see a need for this type of thing?

+1! Right-click to group or ungroup current selection, with Annotations potentially being part of the group, would be super helpful.

Thanks for the great ideas.

If I understand you correct, ideally it should be possible to

Do you mean with group box the same like the container?

Hi @schramm , thanks for your reply. Yes this is a good summary 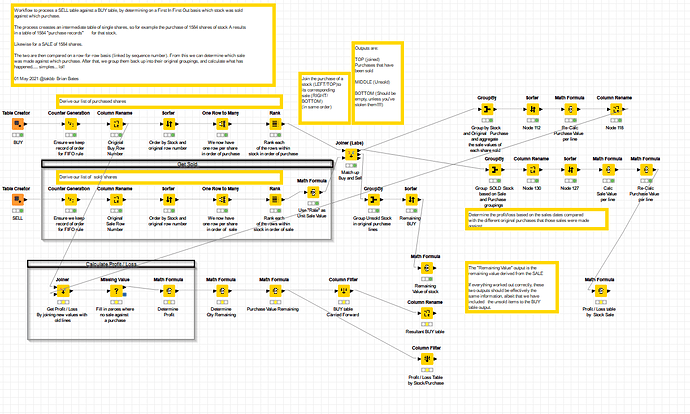 Here I’ve just drawn a couple of “group boxes” on top of a screenshot of a workflow. Maybe these group boxes could have a (possibly optional) title bar so you could just visually name a group, and with the ability to change the line colour. Perhaps they’d also have a “minimize” button or similar mechanism to allow them to be collapsed.