Any suggestion would be highly appreciated.

This blog describes an approach using Unix tool awk and a script. It might be possible to set up such a solution with KNIME although it is not straightforward:

I needed to migrate a set of tables from MySQL/MariaDB to a different SQL database recently. My source was not an actual live connection to…

This high ranked stackoverflow entry describes an approach using R. There are also some limitations mentioned.

Or you could try and set up new MySQL database and import the dump.

mlauber71, thanks for the answer.
Sorry. The answer is late.

Is there an example of how you implemented it in the KNIME Analytics Platform?

OK, I built something since the mentioned examples are not straightforward (if you want to play around with them further in a subfolder of the workflow there is a /script/ folder containing some tests with R and Python scrips mentioned in the links but the results are insufficient if you have more complex INSERTS statements).

As an example I use the Mondial MySQL dump mentioned here:
https://blog.twineworks.com/converting-a-mysql-dump-to-csv-files-b5e92d7cc5dd
(which is also included in the workflow subfolder /data/)

A fair warning: it ain’t pretty and may not be for the faint-hearted, and depending on your dump some modifications might be necessary and if your data gets very big you might have a problem since KNIME Flow variables might not be able to handle it. For this example, it does work, however.

So what this workflow does is it identifies the 4 components of the SQL statements needed to (re-)build a database. The numbers will be represented in the no_marker/no_marker_orig columns.

This is an overview of what you get. Fill in the MySQL dump and (re-)create the databases in H2. 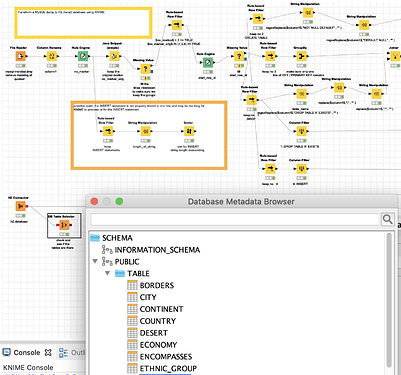 This is what it looks like in a detail with the 3 steps: 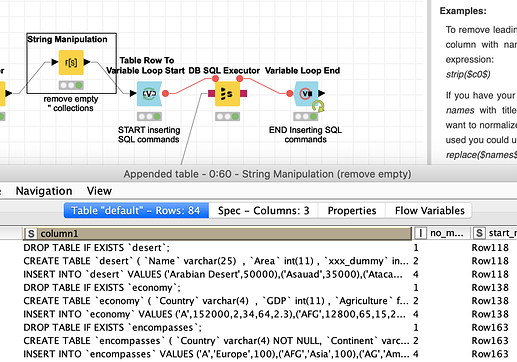 Here are the three (remaining) steps in their glory:

OK, I built something since the mentioned examples are not straightforward (if you want to play around with them further in a subfolder of the workflow there i…