you can simply use the “Row Filter” node. The node provides an option to filter values which are within a specified range (e.g. 311.01 - 311.99). Otherwise you could also use a regular expression in the Row Filter node. For this you have to check the ‘use pattern matching’ option as well as the regular expression check box and enter 311(.{1}\d*|\Z) (for example) to detect all numbers that are 311 or 311 with any decimal number afterwards.

I hope, this answers your question.

Thank you. I have a list of numbers though. Would I have to do a row filter node for each number? That would take too long. Is there a way to list all the numbers in one node?

no, you don’t have to apply a row filter for each number. 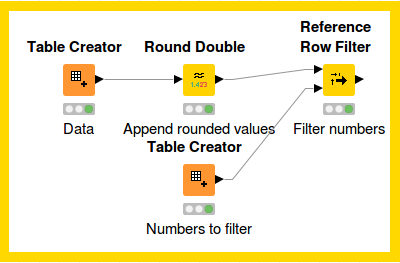 Ok thank you again. I am having some problems converting the data from strings to doubles. I believe I need to do this, so I can use the Round Double node. The codes are not all purely numbers. Some codes are like A01.00 to A01.99. There can be a letter component. How can I covert this to a double. When I use the “String to Number” node, the column of codes that I want changed from string to number(double) is filled with question marks. A message comes up that reads “There are no columns containing double values in the input table”