Would it be possible to make an option as to chose between radians and degrees. As it is easier to enter for example 90 degrees compared to 1.57079633 radians. Wouldn't be too hard to have the node itself calculate the radians from the degrees I imagine.

Also for some reason it turns my image yellow, when I use this node.

Agree. Have same issue with yellow color as well.

we'll take a look in the next two weeks - thanks for reporting!

Personally I think it has something to do with the file format and or rotation by microsoft image viewer. As the picture I showed I rotated beforehand, but it didnt show up in KNIME. After this I also took some of the images that gave me the problem and opened them in Paint, (were rotation done by microsoft image viewer was displayed correctly) edited them a little bit and then opened them in KNIME without the image turning yellow.

If it helps to find the issue: My images are barocodes generated with barcode4j. format is png. They were not tocuhed with the mentioned image viewer (unless barcode4j uses it internal).

I solved the issue by giving barcode4j the correct rotation and hence don't need this node anymore.

If I rotated an image with the image viewer the image didn't show up as rotated in Knime as you also experienced, however if I rotated it with the Rotation 2D node it actually didn't turn yellow.

Do you have some example workflow where this happens?

Does anyone have a solution for the yellow-color problem? I’m getting it as well.

Hi @kimnik6,
can you share an example picture with us?
best,
Gabriel

If you still need an image example, let me know.

I just found this topic and I’m getting yellow also. I’m editing lots of scanned index cards of my late grandmother’s recipes. 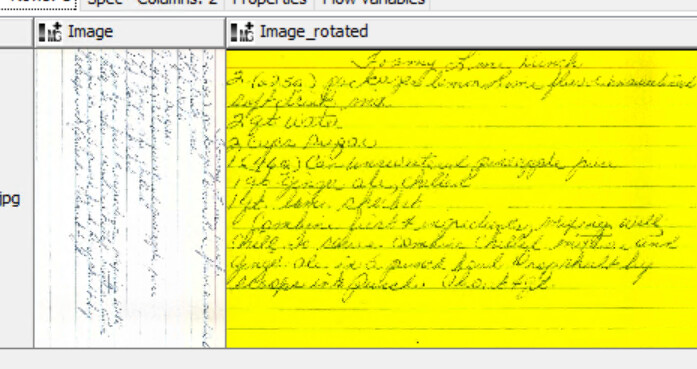 The issue is being tracked since 2018 here:

If a n-dimensional image (n > 2) is rotated with Rotate 2D all dimensions which are not selected are reduced by...

I guess a (hacky) workaround would be to add an additional channel just before the rotation, so that the size of the Channel dimension becomes 4, and after the rotation is 3 again.

The Rotation 2D node uses some outdated API from the imagej-deprecated repository, I submitted a pull request that hopefully fixes this, once the component is released with a new version, and KNIME Image Processing (knip) updated to use this newer version.