Save Image as JPG ends up in grayscale instead of RGB

Hi,
I have 16-bit images with 3 channels, which I converted to 8-bit. Within KNIME everything looks nice but when I use the Image Writer to save them as RGB-Jpg, I only get a grayscale Jpg.
Can anybody explain the issue? I have no idea why it is not working. Here is a workflow to reproduce the issue:
export_as_rgb_image.knwf (91.7 KB)

I think you have to name the channel dimension Channel (instead of C in your images) for the Image Writer to recognize it.

See also the dropdown in the Dimension Mapping tab of the Image Writer: 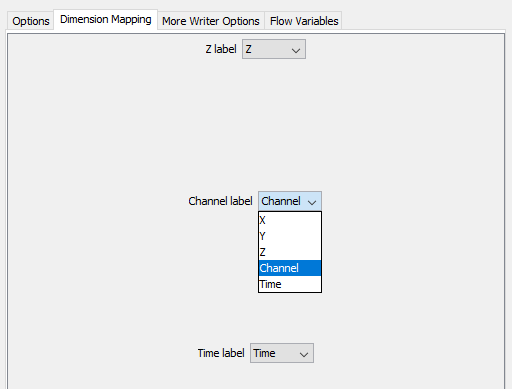 No, that cannot be the problem.

Anyway, thank you for your answer!

where I explicitly give the dimension labels as X,Y,C…

That’s exactly the issue. You should specify X,Y,Channel, not X,Y,C.

The Image Viewer doesn’t check the label of the dimension, it just provides an RGB renderer in all cases where the third dimension is <= 3.

Indeed, this solves the issue… thank you!
I had this issue also when not using the ‘Merger’. So basically, my 16-bit TIF-images are loaded with X,Y,C dimensions (I checked that) and I have to rename the third dimension if I want to get an RGB-image.
How could I have known that. Can you point me to some documentation which might be useful?

Can you point me to some documentation which might be useful?

Documentation is sparse indeed. I drew most of my knowledge from the example workflows on the server, from trial-and-error in all the config dialogs, and from following the issues on the knip repository over the last five years:

So basically, my 16-bit TIF-images are loaded with X,Y,C dimensions (I checked that)

How do you read them? Which nodes etc.?

Yes, I used the ‘Image Reader’ node. But I have to admit, that these images already have been created before with an ‘Image Writer’ node (I read three different 16-bit gray scale images (TIF), cropped a region and saved it as a single TIF containing all three channels. Might well be that I should have done it differently. But as neither Fiji nor Python had problems with these TIFs, I assumed that things are set correct.)

Concerning the documentation: As I guess that I will not manage to follow things so continuously like you, I might come back asking here if there is any behaviour I do not understand