Should it be taking this long?

Apologies for the semi-repeat post however I have read through many posts (many on old versions) and applied what I have found to little effect.

Have experimented with the Knime.ini configuration and is currently set to use 18GB and 1m cellsinmemory

KNIME has been updated to the latest release

The data is all transactional sales data from 4 different systems which need to be transformed before being combined with additional joins from other smaller ‘dictionaries’ such as FX rates etc.

The longest node to run is a left outer join with the left table being the sales data (350k rows), and the right table being all the UK postcode prefixes (3k rows, 3 columns). This is done in order to validate which prefixes in the sales data are valid (most of the data comes from 2 of the systems without built in validation, also need to add cities to all of the data).

Additional long running nodes are all joins, again with the 350k left and anywhere from 300 to 18k on the right. These include joins from a pre-downloaded dataset from Companies House (only records that we are matching to) and SIC lookups from the codes from Companies House.

from your data I cannot really tell you if it is normal or not.
Can you give an example workflow for a step you think is particular slow (with dummy data https://nodepit.com/node/org.knime.base.node.util.sampledata.SampleDataNodeFactory )?

@knightyboy welcome to the KNIME forum

These things come to my mind:

Then concerning your data

You asked for speed but one more experiment could be to use Hive and the local big data environment. In theory Hive should be able to at least finish the job. But that would be more of an issue if your job would not finish at all.

A few remarks since it is difficult to judge from the screenshots: if you have to process that many files and lines it could make sense to do it in chunks and have some method in place to log the current status and be able to restart at a certain point. Eg. write results to disk after each 50 out of 900 processed files or something. Because if you do not have a very powerful infrastructure, compartmentalization might be a thing for you also this saving of steps in-between might function as som…

Will the large dataset be imported and the problems will occur later or do you experience problems also when loading data? If you have problems with import it might help to use the R library Readr instead of KNIME file reader. I know of no formal restriction for data in KNIME but it depends on how much power your system might bring. These points might be able to help you check out the links below with hints from KNIME and other information about performance with large datasets from CSV it mig…

you could try and increase the assigned memory in the knime.ini configuration file but with only 4 GB there are limits to that (https://www.knime.com/blog/optimizing-knime-workflows-for-performance). On other option is to set the “Memory Policy” of the (sorter) node to “Write tables to disc”. Obviously this increases the load on the hard drive but it might save on RAM. [image] Also you could try and close other workflows, restart KNIME an try to use the garbage collector. [image] [image] T…

You might want to check your virus scanner. On certain systems with quite aggressive virus scanners I experienced KNIME to be slow. Since it can contain several 1,000 single files an ‘agressive’ virus scanner might scan all of them every time they are accessed/opened. When we changed the settings KNIME started faster. Of course there is a trade off between security and speed. But modern virus scanners might be able to have a flexible configuration. But of course the number of AddOns and the ove…

That is certainly odd. To the best of my knowledge, there haven’t been any recent major changes to KNIME that are known to have a degrading effect on performance. From my experience, the most dominating performance factor in KNIME is the materialization of intermediate data tables on disk. Have you noticed the performance of your hard disk degrading independently of KNIME? While we have some performance improvements for KNIME in the pipeline, here are some small adjustments you can try out: Y…

I’ve started to split my data before joins to remove the missing values from going through the join, and then concatenating back afterwards, this seems to help a lot (would be nice if the join had it’s own built in logic to do this, I guess I assumed it would skip those rows, although I guess it works much like an Excel lookup)

Once I’ve completed that process, I will look at seeing if I can simplify some of the steps and break the workflow up into subworkflows and adding in some of your other recommendations.

Regarding the garbage collector, how am I meant to utilise that?

However I don’t understand how to insert that into my workflow, as it contains input/output ports that won’t connect to any of my existing nodes.

Glad you like the information. If you consider using a call workflow scenario that comes with some quirks. I have tried to set up such a scenario. You might have look:

Call sub workflow from a mother KNIME workflow. Communicate between them via JSON files

In general you will have to do some trial and error to get a feeling what is best for your task and plan ahead with the reduction of workload for the system in mind. From my experience the combination of Cache and join in memory (wahtever combination fits best) could help a lot.

However I don’t understand how to insert that into my workflow, as it contains input/output ports that won’t connect to any of my existing nodes.

You could just use the flow variable. There alse seems to be a ‘heavy garbage collector’ - also some configuration is possible. Maybe you read about that in the description. 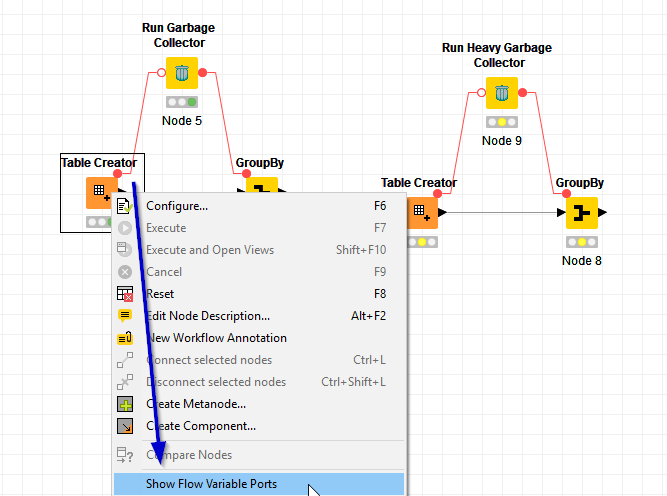 This node forces the JVM Garbage collector to Run, freeing up memory. It reports the amount of used memory before and after to the console log (at the INFO lev…

Here is a way to have garbage collection without additional installation

Hi, @ScottF already gave good solutions. If you do not want to install another extension (the Vernalis nodes), you can also hint at the system to run garbage collection by using System.gc(); in a Java Edit Variable node. Kind regards, Alexander