Good Afternoon KNIME Team,
I am using a string manipulator to change S3 file locations. I’m looking to replace any instance of “%20” with a " “. When I tried to use the String Manipulator with the function: replaceChars($Column$,”%20"," ") all combinations of “20” were being removed.

I didn’t see documentation that % is a wild card character for the String Manipulation node, also unexpected is that the instances of “20” were not being replaced with a space, but being removed from the string.

I found that using the String Replacer node worked as expected. Is there a reason one node worked and the other didn’t?

For me this seems to work. You could try and escape the %20 with a \ 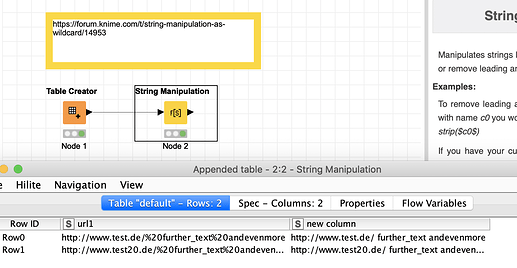 Also it is not using % as a wildcard and escape is not necessary for it.