I am doing analysis of some election data, I need to calculate the losing margin of each candidate in a particular seat. Example below, can someone pls advise how I can do that?
The calculation is simple - Votes of each candidates minus the max votes of that seat 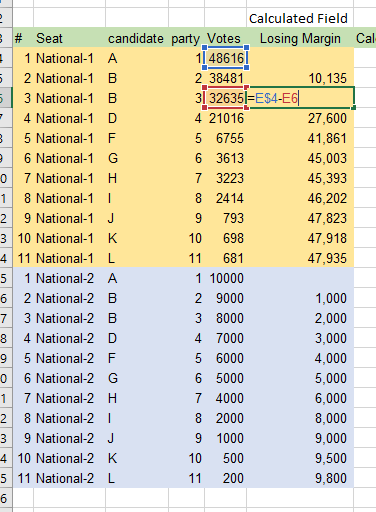 Welcome to the forum @sal.

Try using Group Loop start node to iterate through the various groups one by one. A Math Formula node will allow you to do the math. Finish with a Loop End node.

Hi @sal , and welcome to the Knime Community. The solution would be how @elsamuel suggested.

We can put something together if it’s not clear for you, however, it’s better if you share some data that we can use. It’s hard for us having to manually enter what you are showing us in a screenshot.

Knime_Example.xlsx (11.4 KB)
here you go bruno, it would be great if you can put something together. Thanks!

Take a look a this wf substract_from_max.knwf (26.9 KB) .
It uses a Group Loop (doing a calculation for every group of “Seat” with the Math Formula node (COL_MAX($Votes$) - $Votes$)
gr, Hans

I added the results in a new column called “Knime Losing Margin” so you can compare to what you got from Excel: 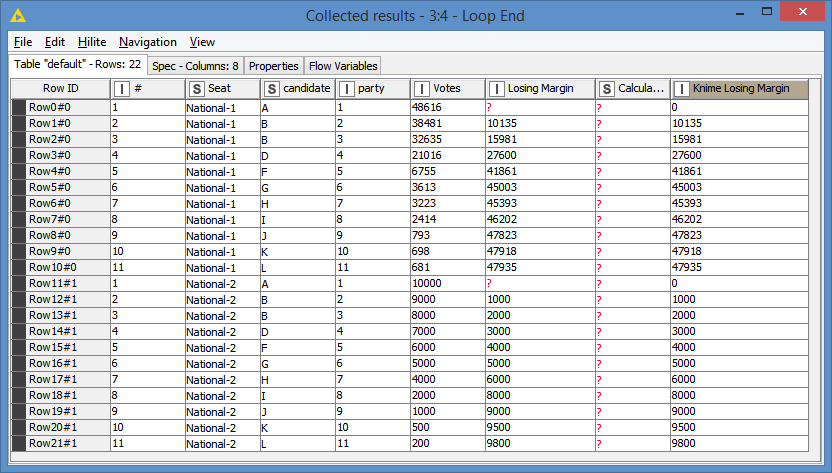 As you can see, the results are the same.

Here’s the workflow: Substract all values in a rows from the maximum value in a group.knwf (23.0 KB)

Thanks @bruno29a. Really appreciate it!

Thanks @HansS . Really appreciate it!

examples of whats inside each node

Hi @sal , I put something together for your 2 example requests.

Is there a way to build an “if then else logic” here e.g. if the party is X than do Votes+2 otherwise Votes+3?

This sort of if then else logic can usually be tackled by a Rule-Engine node with:

The problem here is that someValue and anotherValue cannot be calculated within the Rule Engine, that is you cannot do operations such as Votes+2 or Votes+3. You can assigned a fixed value, or point to a column.

In this case, you want to use Column Expressions: 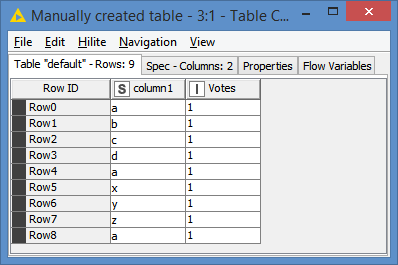 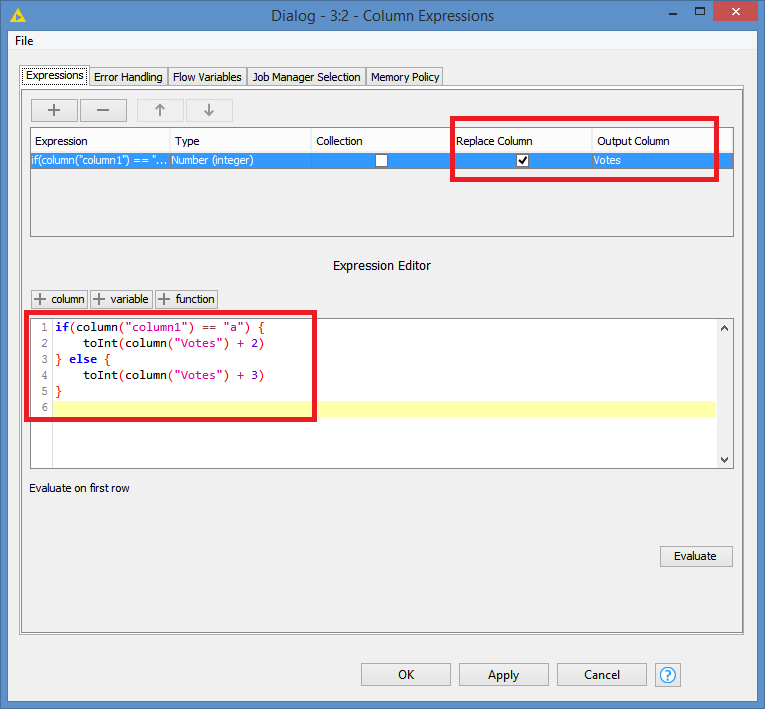 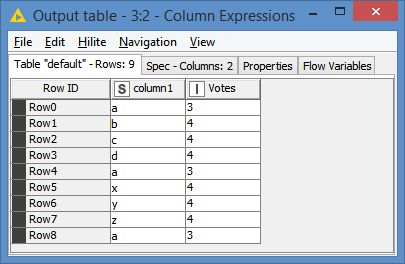 Since I chose to replace the column, the results of the above logic will end up in the Votes column, hereby replacing the original values with the results.

Can someone share a working example of how Math Formula (Multi Column) is used to replace a sequence of Math nodes what do different operations on different columns?

The first rule to remember about the Math Formula nodes - both Math Formula or Math Formula (Multi Column), is that they can only be used with columns of type number. I purposely added a String column Item in the example.

When you try to configure the Math Formula nodes on this table, you will have access only to the columns of type number, and therefore not to the string column Item: 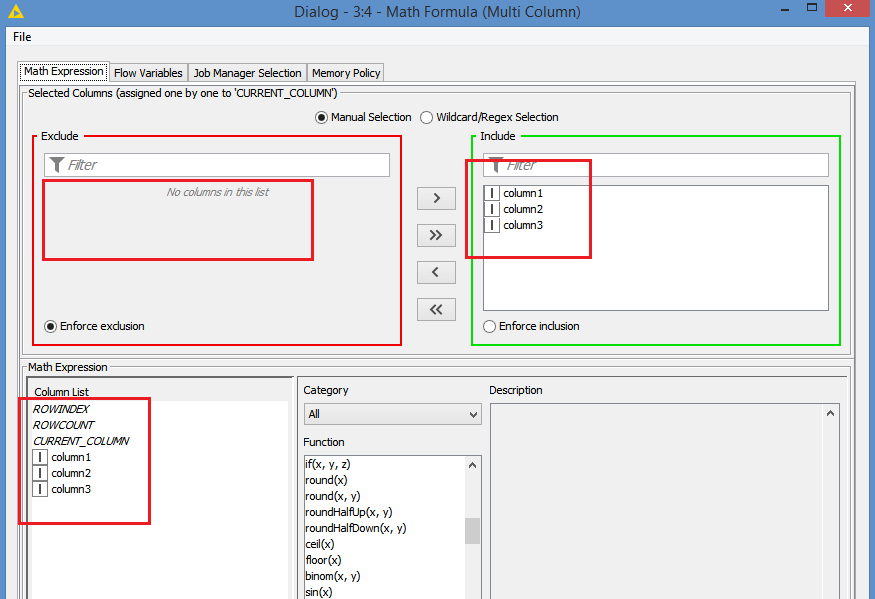 As you can see, only the integer columns are available for selection.

In this node, I want to do an operation where I’m doing X2 on the columns column2 and column3. In this case, I want to include these 2 columns, and exclude column1:

So, the operation of X2 will be applied only to column2 and column3.

The Math Formula (Multi Column) main purpose is that you can do that operation for multiple columns without having to write the expression multiple times. So the expression would be written like this:
$$CURRENT_COLUMN$$ * 2

In this case, I chose to replace the columns with the results, so column2 and column3 will have new values (original values x 2):

For the other Math Formula (Multi Column), I want to do a similar operation as what you did for the Losing Margin, and I want to do this this on all of the columns. I also want to add this result in new columns instead of overwritten the original values.
Note: Since this node goes after the previous Math Formula (Multi Column), that means that the input data for this node is what the output of the previous node was, which is the last screenshot.

So, the new node is configured as follows: 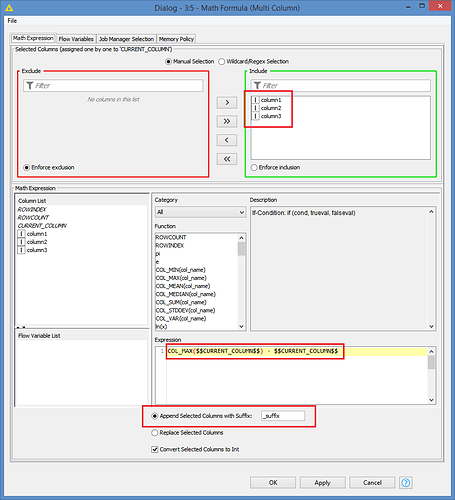 As you can see, I performed 2 different operations (x2 and the Losing Margin) on multiple columns, but each operation had to be done in separate nodes.

Thanks @bruno29a for the elaborate discussion