This sounded like a fun experiment and a good opportunity to use some of the KNIME text processing extension without diving into any complicated Machine Learning. So, I decided to play with the idea a bit this afternoon.

I’d like to say this strategy doesn’t generate the most coherent sentences as it only references the previous word when choosing the next. Using an LSTM network would be a more robust method of attacking this problem. As Rosaria Silipo did here.

Having said that, here’s a workflow that does what you described! Play around with it a bit and see what you can make it do.
You’ll need to direct the Tika Parser node at the beginning of the workflow to a folder with some reference document(s) but after that it should be good to go. 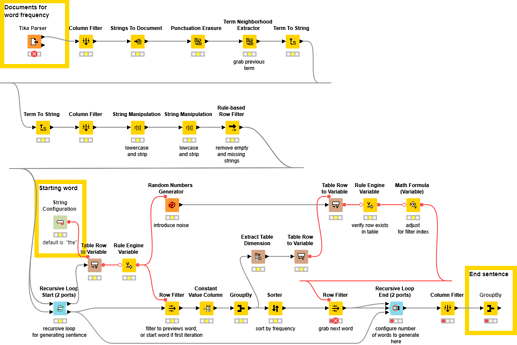 Simple text autocomplete based on next word frequency from arbitrary documents corpus.

Cheers and have a good weekend!
Corey.

–
p.s. if anyone is curious what an output looks like but doesn’t want to run it, here’s an example from when I ran it on some docs I had lying around:

Thank you Corey it works.