I imported data via Excel, put it through a column filter and then to a Tile View. There is text in the data with CR/LF but the output of the Tile View has stripped those and I want them as the text is nicely formatted, even in the output from the Column Filter. How do I preserve these CR/LFs?

Also, is is possible to export the tile view output, perhaps to HTML? It would be nice, then one could search the web page and copy/paste data.

Hi @welprocess
I haven’t used Tile View but it occurred to me that it was probably outputting html which ignores CR LF embedded in any text.

In regular html, if you have pre-formatted text, that you wish to output “as is”, you can wrap it with the <PRE> tag.

There may be another way, but one option is to do this to your text. Attached is an example. 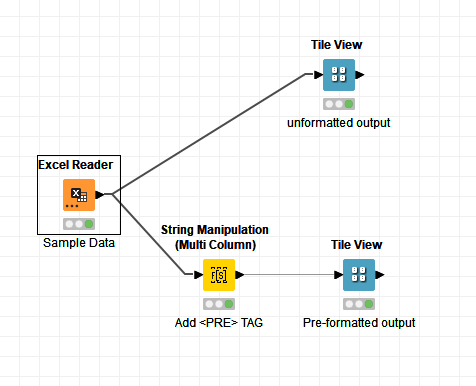 An alternative to this would be to replace all of your line breaks with html <br> tags, which would add html line breaks to the output. You could do this in a String Manipulation node using the following instead of the above formula

This method would also allow you to include other html markup within your text should you wish. Using the <pre> tag would preclude that option, as all of the text would be taken literally and so any embedded markup would be ignored.