We have today updated out community plugin to v1.31.0. This update has been applied to the nightly build, and stable builds from version 4.2 onwards of the analytics platform. 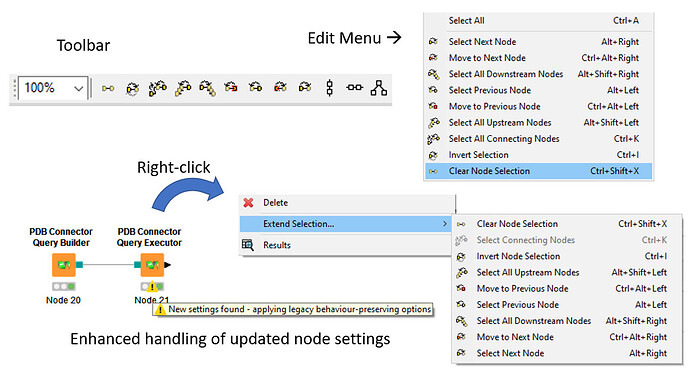 This release provides a number of new features:

Node Selection Modifiers
These are available via the Edit menu, a new submenu on the Node menu and node context menu, and through buttons in the KNIME toolbar ribbon (See the image). Not all will be available, depending on the current selected nodes in the workflow editor window. They all allow modification of the selected nodes, as follows:

Updates to the PDB Connector nodes

Updates to SettingsModelRegistry (Developers Only!)

These changes allow new settings to be added an existing node using SettingsModelRegistry with complete backwards compatibility. New models can be registered with a ‘from’ version, and either a Consumer<?> which acts on the model to set the legacy-compatible version directly, or a BiConsumer<?,NodeSettingsRO> to apply a legacy-compatible value with access to the stored settings objects - for example when a settings model key has been changed. In either case, a custom message can be displayed or a default message used. The result of applying this new feature to a node can be seen in the PDB Connector Query Executor in the image above

Changelog
Finally, following a request from a user, we have added a changelog as the old one on our community page had become outdated and unmanageable. The new one lists all updates right back to our initial release on 25th June 2013 (Some of the version numbers back then are a bit ‘vague’

) along with a table of what the latest version of the nodes on each build channel is.

As always, please do let us know if you encounter any problems

Unfortunately, there was a minor error in versions 4.4/4.5/nightly of this release, which meant that the new UI feature was not available to users. That has now been corrected.