Apologies in advance - this is a long post, as there is a lot in this update, with a lot of new features and versatility added to our Flow Control nodes. As a taster, here is a somewhat contrived example showing some of the new nodes: 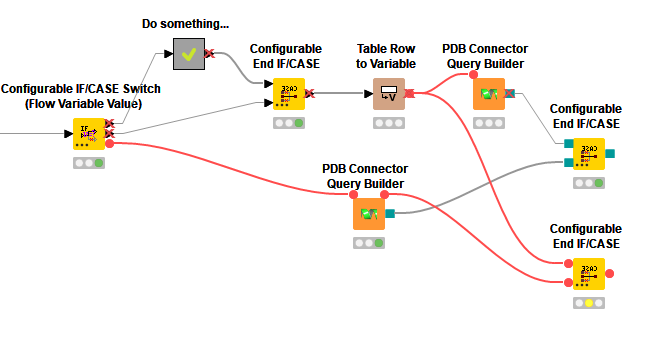 Now the details… (!)
Firstly, we deprecated all the old IF/Case switch nodes, Crossover, End IF/Case nodes for various port types, and replaced them with 5 ‘Configurable’ nodes which do it all, and more.

This node replaces our popular ‘IF Switch (Flow Variable Value)’ series of nodes which we provide for a variety of port types currently.

There is by default 1 standard data table input, and 2 outputs. Again, the ‘base’ port type can be changed, and individual outputs can be changed to flow variable ports (either from the ‘…’ configurable menu, or from within the node dialog.) Additional output ports can also be added.

Each output apart from the last has a separate flow variable condition setting representing a logical comparison operation. The figure below shows the situation for a node configured with 4 outputs. The ‘active’ output is the first output where the logical comparison is true

This is coupled to the new framework for logical comparisons, which allows for additional options for each comparison (e.g. the String comparison in the first and third settings have addition options around case sensitivity, and leading and trailing white-space) - at present we provide comparisons for String, Boolean, Integer, Long and Double, along with their corresponding array variants, and also for the new Path flow variable type. Further comparison methods can be added by implementing the com.vernalis.knime.flowcontrol.variablecondition extension point - please let us know if you spot any obvious comparisons that we have missed!

This node is an ‘enhanced’ version of a standard ‘CASE Switch’ node (which takes 1 input and switches between 3 outputs), of which we have contributed several variants for different port types, and had requests for other port types previously.

In this node, by default, 1 standard input table port is switched between 2 possible output ports. The node is configurable such that:

Additionally, the active port is selected as previously by the value of an integer variable. However, there are now additional options for when the variable is outside the range or available output ports (e.g below 0, or beyond the upper limit of number of ports) as shown:

The default ‘fail’ option is the same as the previous behaviour. There is an additional option to allow negative values to be read ‘backwards’ from the end of the output ports as is the case in Python indexing systems (e.g. -1 refers to the last port, -2 the penultimate port etc)

KNIME has a standard ‘Empty Table Switch’ node which has 1 input table and two outputs. If the incoming table is empty (has no rows), then the second output is the ‘active’ workflow branch, and the empty table is made available there. Frequently, what is needed in this branch is to use a different table (after all, the input is empty!) which required multiple convolutions of nodes to implement

The new ‘configurable’ version of this node allows the user to change the port type of the second input port, allowing all of these cases to be resolved directly

The new version of our node can act in place of all of these. The user can change the basic port type, which is then the port type available as an output. The node by default has two inputs, but any number of inputs can be added.

As an additional feature, for some port types (Currently, the standard KNIME data table, Flow Variable ports and PDB Connector query ports - if you need others, let us know - the new API we added allows adding this very easily - or you can implement the com.vernalis.knime.flowcontrolporttypecombiner extension point yourself!), there are more options available for combining multiple active, making the node considerably more versatile.

This last feature means that the node can also be used standalone as a way of merging ports without them being part of an IF/Case - End IF pair.

This node takes two input ports (in the previous version, these were constrained to be standard data tables, although it would have been possible trivially to add other types as new nodes) Depending on the value of the logical comparison on a flow variable, the two outputs are either in the same order as the inputs, or ‘crossed over’ – i.e. input port 1 is output again as the second output, and input port 2 is output at the first output. All 4 ports must be of the same type, but in this new implementation that type can be selected by the user using the new configurable node feature.

This has been release to the nightly, 4.5 and 4.4 builds this evening. We plan a few further updates in the coming days, after which we will investigate back-porting to KNIME v 4.3 and 4.2.

As always, if you have any comments, suggestions or questions about these nodes, do please get in touch!