Hi there
I have a question which seems to be so obvious to be possible that I guess I am just not really finding the right spot where it is described.

I start by defining the variable as such
varName = “myValue”

then I create a column which is called “myValue” by using the varName flow variable.

What I now want is to access the dynamic column that was created (which is of type double) in the rule engine - but $${myValue}$$ is of course not working.

Is there a way to “interpret” the value of varName so that then the respective column can be accessed in the dialogues?

Since this is a functionality that would be interesting for multiple nodes I guess it must be possible and if not it would be an interesting extensions.
Thanks
Nik
PS: I am aware that I can resolve the issue by not using dynamic variables throughout the process but static columns that are renamed at the end of the workflow to the dynamic name but this is in my opinion not what makes sense (I wouldn’t do it in things like pandas or similar so why here).

Well this is AFAIK the only solution and that is what I do. dynamic column names can be a PITA in KNIME.Best to only assign the dynamic name before showing it to the user. There really is no downside to that.

It seems that in Rule engine node this is not possible. But you have Column Expressions node in which you can access column based on flow variable value.

Not sure in which kind of dialog the variable should appear. Maybe you could give us an example.

The workflow below tries to do some stuff while using the column names as variables. 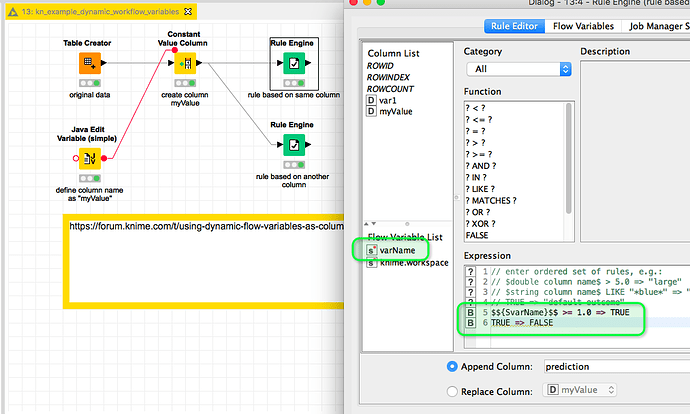