Visualisation with Python in Knime

I am looking for a tutorial how to visualise graphics using Python node and seaborn in Knime. Below its a simple example:

Can someone advice the steps to take in order to visualise a simple heatmap using python node.

Unfortunately Knime doesn’t support a lot of graphics and we need to visualise with python node.

I can show you a Plotly solution, similar principles should apply to matplotlib/seaborn.

For the Plotly solution you will need to add the following packages to your Python (conda) environment:

Kaleido is a package to export Plotly charts to static image file formats, and in this example is used to export the Plotly image to png.

The Python code is then as follows:

The heatmap is generated using the Plotly express function imshow. This takes a pandas dataFrame as input (input_table) and displays it as a heatmap. The options should be self explanatory. The final line takes the Plotly figure and exports it back to KNIME as a png file for export on the image port (output_image). Plotly is highly customisable and there are plenty of resources on the internet to show how to adjust various features.

The above code was used to generate the following example output.

I appreciate that it isn’t seaborn but hope that helps.

For the Plotly solution you will need to add the following packages to your Python (conda) environment:

I am ashamed to say but I still can’t handle this procedure. I installed python node but i dont understand what i shold do next. Below is my screenshot 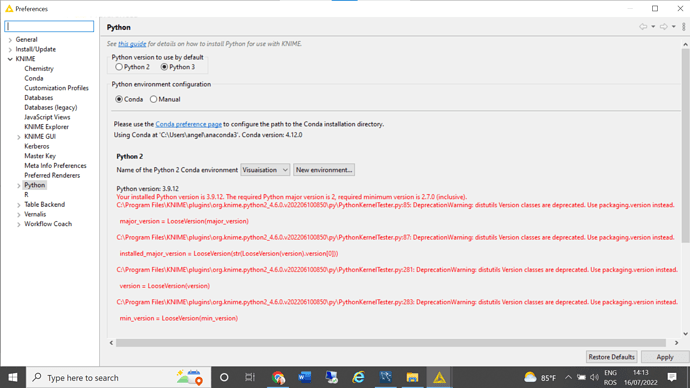 @Angela_dru you could check out these examples

@rogerius1st you might want to find a suitable example with python Matplotlib or Seaborn (or R ggplot2) that can be adapted to your needs with a KNIME component: The new KNIME 4.6 has the necessary python packages integrated so they can be used without additional installations.

About installing python you might want to read this article

And also consult the official guide

When i am installing Python i have an error 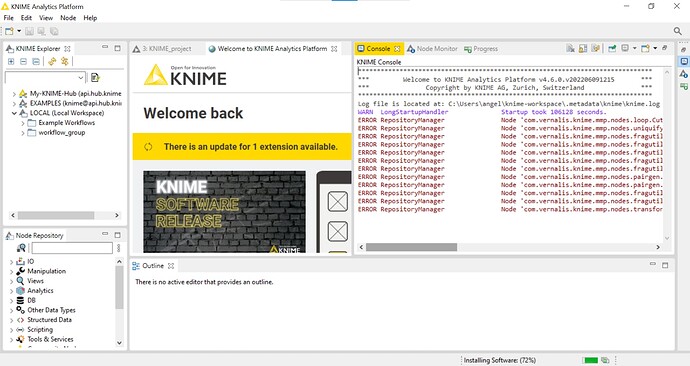 About plotting with the Python Integration:
You can use the Python View node with a script like this:

Thank you very much for your explanation.
I already understood the process. I created successfully a new anaconda environment and already made some graphs.
Its not very complicate but for the first time I was frustrated.

Nice to read that you got it working!

Thanks for your feedback. We are working on making the process more seamless and less frustrating.