What is a "SMARTS Cell type" and how do I provide it to the SMARTS Query Node in CDK?

I’m trying to count the number of times a certain functional group occurs in my molecules. I’m trying to use the SMARTS Query Node (SMARTS Query – KNIME Hub) from the CDK package for that, but I find the documentation and explanation on how to provide input to the node to be cryptic.

It wants me to provide the SMARTS as a “SMARTS Cell type” and I do not know what that is or how to do it. I cannot find example workflows for CDK that show how this process is supposed to work, so I’m stuck since googling didn’t help at all.

My latest solution attempted to convert the molecules to be searched and the SMILES of the functional groups to CDK Molecule Types by reading them in as SDFs and parsing them with the “Molecule to CDK” Node.

I get the error: WARN SMARTS Query 3:106 Column ‘’ does not exist.
And the Node tells me No column in spec compatible to “SmartsValue”. What do? 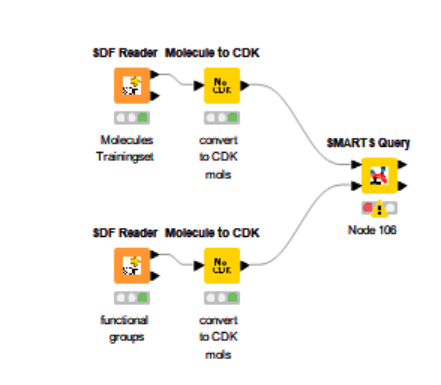 As the node description says, this node matches a list of molecules against a list of SMARTS patterns.

Since you’ve provided the functional groups as CDK formatted molecules instead of SMARTS patterns, you got an error saying that there’s no column containing SMARTS patterns.

The solution is to provide SMARTS patterns for the functional groups. You can read up on SMARTS here if you’re unsure about them.

What is your source for the functional groups? Were they SMILES strings originally? or SMARTS? or were they always mol/sd format?

I provided a simple CSV reader table with SMARTS in the rows before and it told me that that is not a recognized CDK-Type, which is why I tried to provide something that is a CDK-native Object.