Has anyone encountered the issue of using OneDrive to host the KNIME workspace? I have come across a variety of issues ranging from OneDrive arbitrarily not liking “#” and other symbols in the filenames (these are the files created by nodes), and the issue below: 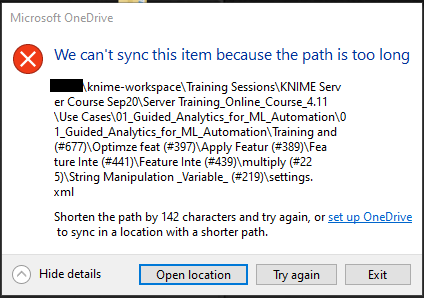 Does anyone have a resolution to this? I just moved my workspace to OneDrive and OneDrive is not playing ball.

I do not know about the absolute length but there have been problems with the # before. As far as I understand one drive can be configured to not allow a certain set of special characters. Maybe the admin can change that. But it is also possible that it is a built in setting dor school and work environments:

I myself do use Dropbox to store knime workflows and never had a problem.

Thanks @mlauber71. It appears OneDrive got stuck in the middle of syncing and as a result partially synced some KNIME files and didn’t sync other files, ultimately corrupting the KNIME workflows!

Strongly recommend avoiding the use of OneDrive as KNIME workflow repository. Besides the character limitations (e.g. # in the filename), filename length (due to folder hierarchies), the sync is very temperamental; plus I was advised not to use it by Microsoft support as it continuously tries to sync when the files are open in KNIME, which itself causes sync issues.