I am parsing a XML which has complex and inconsistent hierarchy. So in my Knime workflow I am using multiple Xpath nodes, concatenate nodes and so on.

I checked in output of previous xpath node and there is only one row with Row0_1_4_1_1 id. It has however ? in the column which I have used as xml source column in a xpath node which is failing. Could that be the reason? How can I avoid this error? What is the purpose of row id? Why would duplicates matter for xpath?

Sharing snapshot of node configuration below: 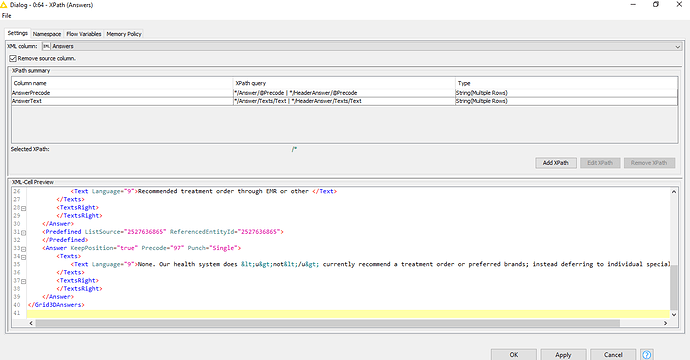 Is it possible for you to provide a workflow with a sample data set which reproduces the error?

Use the RowID node and the problem is solved.

That helped Armin. Thank you! What is the purpose of RowID?

You can create new row IDs, use the values of a column as the row IDs or copy the current row IDs to a new column.

Sorry for not being specific. I meant to ask what is the purpose of rowID which is generated by concatenate node. In my case it was not required and causing error so I was curious why would knime create it in the first place.

I’m not 100% sure about this but I’m pretty sure the Concatenate node is working fine.