I am completely new to KNIME. Can you please help on how to convert the year range(everything in () in year column) to individual years in that range. For Adam Lind to have 2011, 2012, 2013. 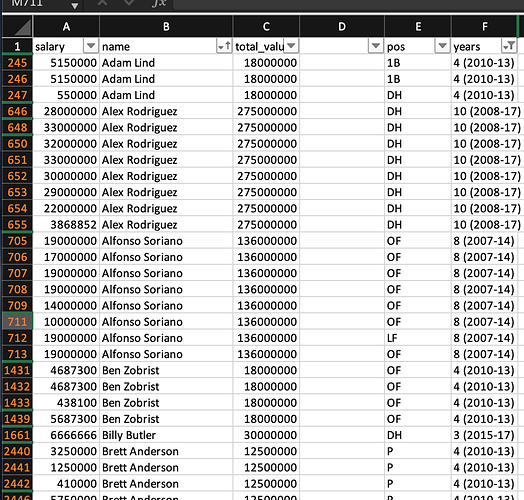 I attached the csv screenshot but I need the KNIME code.

Hi @raffisahakyan and welcome to the Knime Community.

Can you attached the csv file itself so we can have some data to work with?

I am sorry for the confusion. Here is the file, and updated screenshot.

Hi @raffisahakyan , thank you for sharing the file.

Adam Lind is one of the simplest case to look at, in that the years values are the same.

What would the expected results be for A.J. Burnett? This is the data that we have on A.J. Burnett:

Also, the data is provided in this order, but if we look at the values of the years column, it’s not exactly in the right order. Does this mean that we have to sort the data by years?

@duristef , I took a quick look at your workflow. I have a few comments:

Thanks for your reply, sorting is not necessary yet. But now I can see that there are inconsistencies in the data, for some players such as Adam Lind, the season range is provided as 3 entries for others it might be one entry. I will need to go back to the data source.

No problem @raffisahakyan , we’ll wait for the updated data

1 - You’re right, I forgot that ROWKEY is not the same as rowIndex(). I’ve fixed that in the edited version
2 - No, Group Loop would sort on the name, probably (I guess) keeping the row order, but I prefer to sort explicitly on name+row number and to prevent Group Loop to do any sort.
3 - Yes, you could use a variable
The loop works well with players with a single season and with players (like Adam Lind) with multiple seasons and one row for each season, but should be modified to cope with players with many seasons and a single row, so I’ve added a new “sub-workflow” for that case. It remains to be explained how the case of a player with only one year (e.g. “1 (2008)”) should be treated, since he appears not to play for even an entire season

The attached workflow is an alternative to performing a loop. It does makes for a more involved workflow (extra nodes and some “fun and games”), but it will pay off if speed is important.

I know you said you needed to go back to the source data to check some things, so this may not be quite what is ultimately needed, but it gives an idea for a way to create additional rows without a loop, by using the “One Row to Many” node.

I have included your demo excel (as an xlsx file) within the workflow’s data folder, and made all the 16000+ rows visible in excel.

With a loop, I think this could take a significant time to process, but without the loop, you will see that the entire job will be achieved in just a few seconds.

By the way, I didn’t see any data which crossed the “century boundary” (e.g. something like “1998-03” which would need to be interpreted as 1998-2003). I believe this workflow will cater for that situation, but I would recommend some extra testing in that area just in case

Hi @takbb
I’ve added a new “alternative” in my workflow following your interesting suggestions both about Rank and about the calculation of end year (assuming there’s just one row per player-year range).

I just ran it through with the spreadsheet from my uploaded workflow with all the 16k+ rows exposed. The “alternative” branch of your new workflow completed in just a few seconds (Column Expressions node slows things down a little but removes a whole load of complexity!).

A good demonstration of why I try to avoid KNIME loops unless I am totally stuck for an alternative (or the data set is very small), and even then… I desperately try to find an alternative to there being no alternative

Thanks for sharing. Always great when ideas can be built on collaboratively.

2 - No, Group Loop would sort on the name, probably (I guess) keeping the row order, but I prefer to sort explicitly on name+row number and to prevent Group Loop to do any sort.

That is exactly correct, and that is what I said. It sorts on the column that you are grouping on, in this case name, and keep the row order, meaning it’s already doing what you were trying to do. But yes, I agree on why you were doing the sort explicitly.