Change row values based on condition

I have a dataframe with with two columns:

What I want is to add the string “Hour” just before the timepoint value whenever the value is not baseline.

So I would get:

I though of using a rule engine as follows, but theres an error:

It would be more helpful if you said what the error was, but based on the rules you provided I can see that they’re not formatted correctly and they don’t really comply with functions that the Rule Engine node can do.

The first issue is that the NOT function must not be preceded by an argument. It’s only followed by an expression.

The second issue is that I don’t think you can concatenate strings with the Rule Engine node. From the node description:

The outcome of a rule may be any of the following: a string (between " or / ), a number, a boolean constant, a reference to another column or the value of a flow variable value

The good news is that there are a couple ways this can be done: 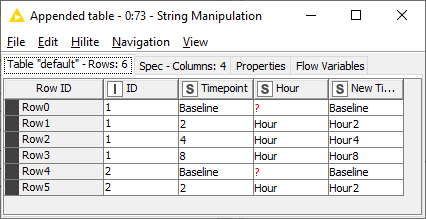 The second approach, and the one I’m partial to, uses the Column Expressions node to combine both manipulations using the expression

Alternatively, you could use the expression 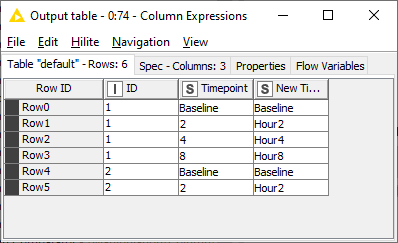 This reminded me of @takbb’s thread about the Java ternary operator, that works in String Manipulation Nodes, while not being part of the documentation.

A fun little puzzle for the weekend! Community

I know that many here (including me) enjoy the challenge of working out workflows, and it’s great to be able to help others with resolving a problem. But I thought, since it’s the weekend, how about putting up a workflow and asking a question purely for fun. So here is a puzzle for you. Some may find it easy (if they know), some might find it more challenging. Attached is a workflow. [image] It reads in a CSV file that is supplied in the workflow’s data area. It does (intentionally undocum…

I never use it in programming because it’s ugly, but it comes in handy because it allows me to Node Golf this question. This expression produces the desired output in a single node, without the use of the cheaty scripting nodes:

Does nothing if the cell contains “Baseline”, otherwise concatenate “Hour” in front of it. No picture because it’s a single String Manipulation Node that replaces the “Timepoint” Column.
change row values with condition.knwf (11.9 KB)