Dear Knimers, I need help in the above-mentioned task in the title.

As an example, I would like Cluster 8, Cluster 14, Cluster 17, Cluster 19, Cluster 23 & Cluster 22 to be identified as one group because they are linked to one another by ‘Alpaca’ & ‘Blueberries’ either directly or indirectly. The intersecting elements must be of exact matches, not fuzzy matches. Other examples would be Cluster 24 & Cluster 25 due to the element ‘Blues’.

I am looking for a fully automated solution. The outcome table can be as simple as a row reporting the names of the linked clusters separated by commas.

Let’s take your example of “I would like Cluster 8, Cluster 14, Cluster 17, Cluster 19, Cluster 23 & Cluster 22 to be identified as one group”, what would be the output of that? An additional column called “Group” and with a Group number/ID?

Hi @bruno29a , the new group name can take in one of its clusters’ names since the clusters’ names are unique. I would prefer it as a separate table of 2 columns - New Group Name & Group Members.

Hi @badger101 , thanks for the sample output.

I think I got something for you.

Does this result look good? 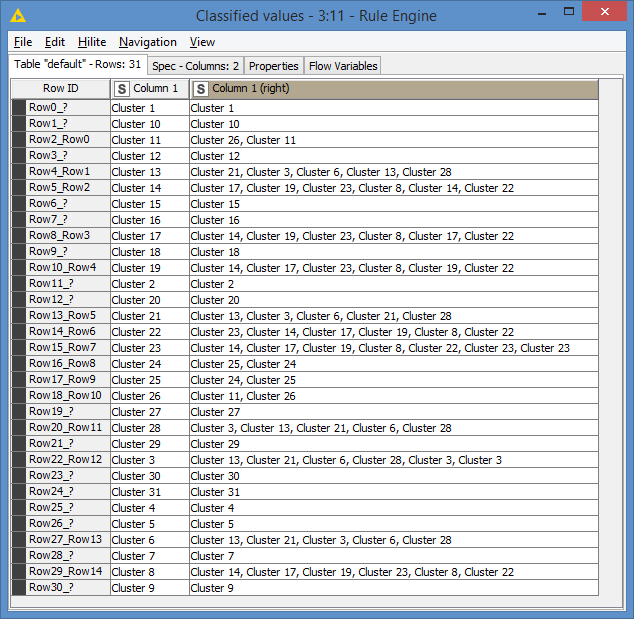 Thanks for that attempt @bruno29a , while the table format is okay, but the outcome table contained a lot of intersecting groups still. For example, The Row5_Row2, Row8_Row3, Row10_Row4 and some others should be grouped together as one.

Well, it is what I originally thought, but after seeing your sample output, that was not clear.

I mean why choose Cluster 24 or Cluster 8 as New Name? I thought the results was by Cluster.

This can easily be fixed.

Results after the modifications: 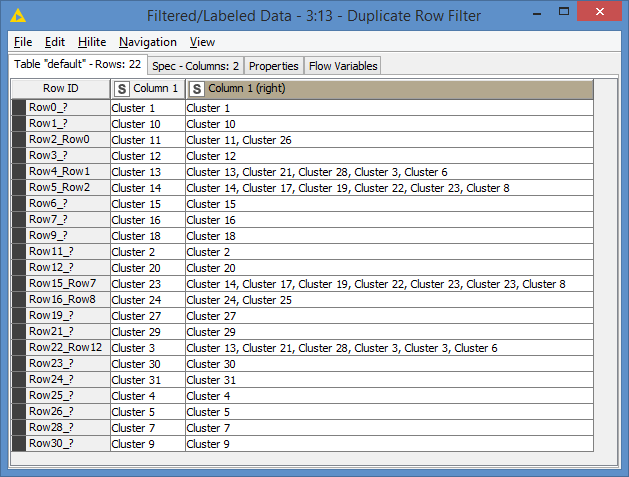 Note: Sorry it took a bit of time to modify it. I had already closed my Knime, and it’s slow to start. Also had to reconnect to the Hub, and it’s past 2am here.

Hopefully this should do the trick.

EDIT: I chose the new name based on the sorted values. This is alphanumeric, meaning Cluster 14 is sorted before Cluster 8, hence why Cluster 14 was chosen. If you want Cluster 8, you can tweak by retrieving 8, 14, etc as numerical in a new column, then sort by that new column.

Thank you @bruno29a , I can still see intersections there. What I’ll do is I’ll try to make an Excel table of how the result will be like according to this data here, and given that it’s already past 12 AM your time, I’m okay if you relook on another day, (unless someone else want to step in of course.)

Really appreciate the time you took!

I’ll update this post maybe in a few hours with the Excel file.

Found the mistake @badger101 . Somehow the values in the column2 interfered with the deduping. In the end it’s not needed, so once removed for deduping, the workflow deduped properly. 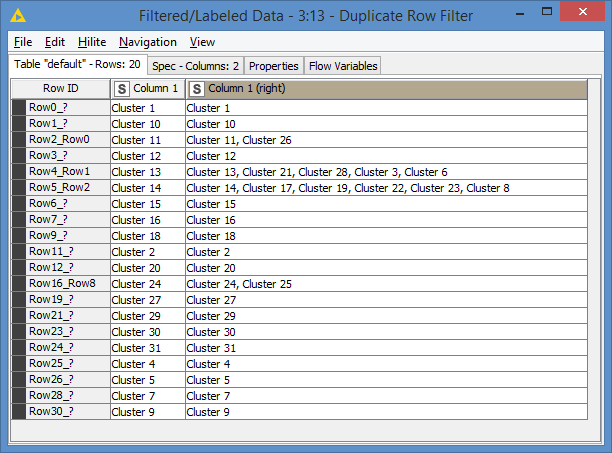 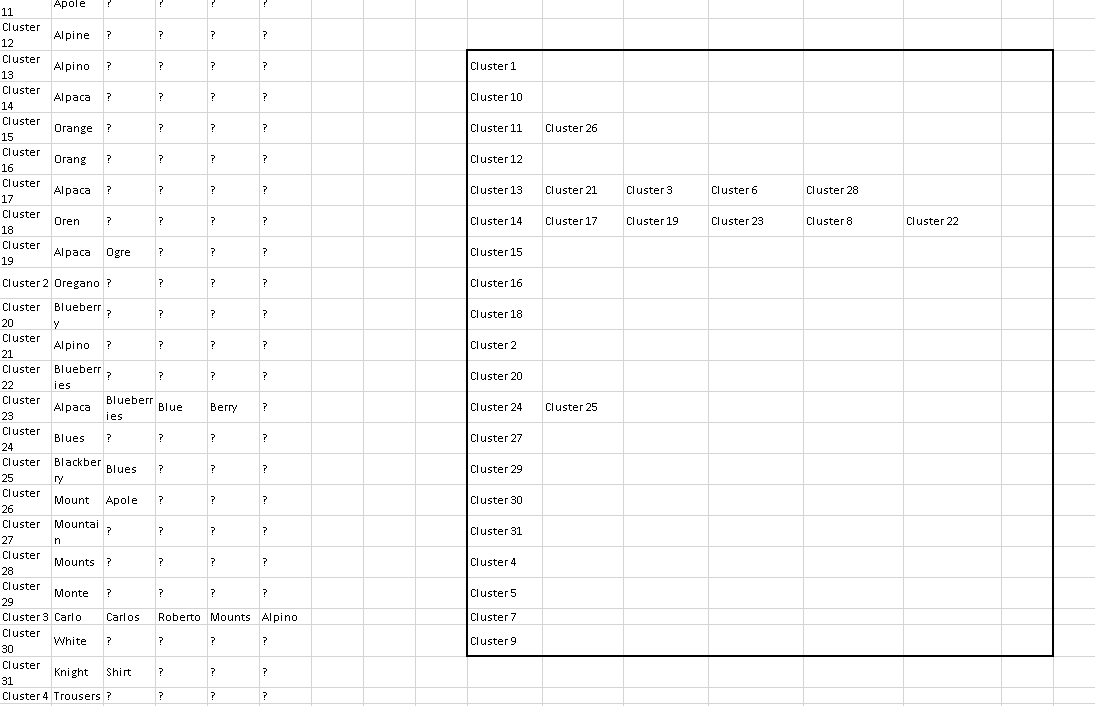 Thanks a lot @bruno29a !!! Exactly similar to my Excel result

I’ve marked it as a solution. How many hours did it take for you to solve it? I probably used up at least 3 hours of my time before going to bed with no solution last night.

I tried so many nodes you’ve used here, but including Cross Joiner.

I don’t know how much it took me, probably less than 30 mins… It’s not a big workflow and there’s not a lot of data.

I had a clear idea of what approach I wanted to take since the beginning. Once this is set, it’s pretty easy after. That is why it took me just a few seconds what to modify (Node 12 + Node 13) after your additional clarification. Similarly for the duplicates, I knew exactly where to fix this (Node 8 had to be adjusted).

Of course, you can uncover some challenges as you start implementing, but in most cases the challenges are solvable. For example, I was trying to find a way to “merge” my results after the 2nd join. I started going towards Rule Engine in my mind, but then realized that doing a Concatenate will do this for me.

The proper approach is using 2 inner joins, or at least that’s the approach I used.

These 2 joins being inner joins meant that they would include only those who had a relation, hence why I needed that 3rd join which is a left join in order to include those that did not have a relation.

I think this can still be optimized where we could eliminate the left join. There are 2 ways I can see this:

This was more of a “lazy” way since it was quite late.

The work itself took about 30 mins (Analyzing, thinking, implementing), but that spanned probably over an hour or so with the back and forth for clarification and my Knime and system being very slow (I’m running with about 2% space capacity

Time for a new computer!

Hi @badger101 and @bruno29a,
in addition to the accepted solution: For use cases like this, the Network Component Splitter node was built. It can detect intersections like this over an arbitrary number of “jumps” and also for large data volumes. If of interest to you and you need further assistance, please let me know by tagging me.
Best regards
Arne

Thank you @arbe , I’ll test it out if I face the same task again in the future.

And that includes some manipulation nodes as my data is not in a node-node but rather node-value/attribute relation. If this node would have configuration options to handle those cases as well that would be awesome

Thanks a lot for the feedback. I really appreciate you using the node and deeming it valuable. I also love it and it is in my standard toolset for data wrangling.
Regarding your idea: That sounds good, many users will have node-attribute relations (so does this post which we are writing in). What exactly would be the desired functionality? Avoiding coincidental clashes of node and attribute names + removing the attribute to cluster assignment in the result table?

Avoiding coincidental clashes of node and attribute names + removing the attribute to cluster assignment in the result table?

Correct. However workaround is not too complex. Add prefix to Node column which does not exist in Attribute column and based on which filtering is performed to leave only nodes inside clusters.

Also have couple of more ideas what this node could feature but maybe those things are two specific for my use case. Anyways if I think they are worth sharing I’ll open up a new topic.

If possible please do that. The flow on the knime hub does not help me to full understand this (for me) new node.
br and have a great weekend