Hi team KNIME.
I just looked at the new UI, and just want to say…loving it. Looks so elegant, I cannot wait till full functionality is available. This UI will turn a lot of heads if you ask me.

Love the table view at the bottom. As data engineer I always look at the data when working with it and now so much easier and better looking.

Move the node buttons to the top and display the configuration window on the left when selecting a node.

Really dig the feel of the new UI! my biggest issue picking up Knime was just navigating the clunky UI. I think this will help people pick up the concepts much quicker but a power user would end up needing to swap back to the old UI until more features are brought over to this new one.

Agree with many other wish list items in this thread so adding mine here as well.

Just tried it. There’s a lot of potential, but my immediate criticisms are:

You might be aware of it already, but nodes that are auto-generated e.g. by the #imagej #image-processing extension currently don’t show up in the node repository of the new UI.
In particular, I’m missing all the nodes of the FMI KNIME Plugins (that do show up fine in the standard UI).

Overall so far for me is in summary, looks polished and modern, but loses a lot of functionality and usability, making tasks more frustrating than before.

thanks. i guess I don’t need to try it out then at all because the concerns you mention would impact my work in the exact same way.

I quote this part because in every application that did a redesign, this was the outcome. The old, somewhat ugly looking but functional UI got replaced by something better looking but generally much less usable. Like Windows 8 or Windows 11 (task bar…), pgadmin4,…
The only real thing the current UI is lacking is a fuzzy node search but else a tree view that uses little space is just so much more usable.

Thank you for your valuable feedback – we will make sure that your feedback will be considered for the next releases, however promises can not be made as of if and when they will be implemented. The preview was released to be able to gather feedback in order to incorporate necessary changes. This prevents a situation whereby products and features (like described) were released without sufficient community feedback, which would make our products less usable and functional.

We are currently in the middle of the development process and will further improve it with the upcoming releases.

I categorized the feedback into different topics and tagged you.

@brkylmz Could you please give us more details about your installation or the workflow that you tried to open up. Have you tried it also with a new KNIME Analytics Platform installation?

@Experimenter node lockup? Sorry I don’t get this completely, could you please give me some more details about that.

@imagejan – I have created an internal ticket for it – NXT-1161, regarding your problems with the nodes that are not shown up in the node repository.

@kienerj Fuzzy Search is available in the current user interface by activating the button near the current “Node Repository Search” input field. In the Modern UI we are using in the node repository fuzzy search by default.

If you have any additional feedback or questions, feel free to reply.

Aligning and arranging nodes and annotations like now is on the list but has at the moment not the highest priority. For us it would be good to know what exactly you are looking for. Is the current auto format option all you need?

The auto-align function is great to help organizing a workflow. What I would really like (for quite some time now) is that the text beneath the node would be taken into consideration when aligning the nodes. I very often use the text beneath the nodes to document and describe what is going on so that hopefully no further boxes are needed but the texts would overlap if they are too large. So just (?) take them into account when aligning the nodes. 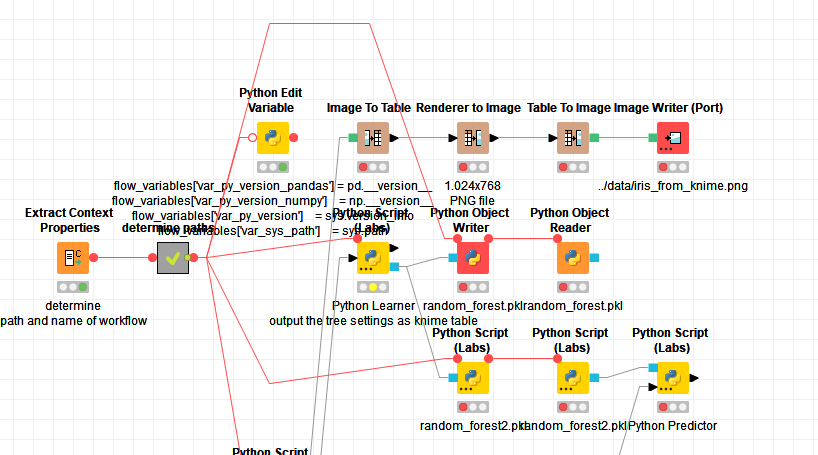 Maybe start with combining boxes and groups of nodes that can be grouped together and be then automatically organized. That would make my life much easier

Thanks for the update.

I’d certainly be happy to look at any new renderers, particularly for chemical structures, as when they’re developed.

Re. the node repo. I can see that this new UI presents an opportunity to improve the way users navigate installed nodes, beyond the typical tree structure. In the current UI, you mostly have to know where something is, or exactly what it’s called, to be able to find it. That’s not ideal. Maybe if plugin developers could assign their nodes a series of common key words, which could have an ontology applied to narrow down browsing, e.g. assigning “Converter”, “Chemistry”, “RDKit” to all its RDKit to and from nodes. It sort of looks like that’s where you’re going, but I think you’ll need help from the node devs to tidy up their plugins.

I haven’t had a chance to use the Modern UI preview much as yet but I have been reading with interest other’s comments which in many cases reflect my views from what I have seen. I fully intend to give more detailed feedback on the good and the not-so-good, as I think this is very exciting, and in my quick plays there are some great new features (and many existing missing features that I am sure (hope!) will be added).

There is one thing though (probably not an obvious thing) that right now got me so excited that I thought I’d share it:

One thing that really bugs me in the existing/old UI when dealing with large workflows in KNIME is the ability to move a node or a group of nodes easily around the workflow when they go “off screen”. The choices are to either select the group of nodes, then zoom out, and drag them (but on large workflows you can kind of “lose your place” in terms of where you want to drag them to), or you can drag them a bit, then scroll, then drag a bit more, then scroll and so on until you get to where you want to drop them.

I was hoping that the modern UI would resolve this by giving us the ability to drag off screen and have the workflow scroll automatically as we do. I was disappointed to find this still doesn’t behave that way… BUT… one other thought was that they keyboard cursor keys can scroll the scrollbars, so wouldn’t it be nice if whilst dragging with mouse, the cursor keys could activate the scrollbars?

Well, on the old UI, it doesn’t work that way… but in the modern UI preview… It does!

So I don’t know if this is intentional, or a side-effect but whatever it is, please don’t lose that new functionality.

I have now found that when working on a large workflow, if I want to move a node or group of nodes “off screen” and place it precisely, I switch to the modern UI, select the nodes, then drag them off screen and whilst continuing to drag I use the keyboard cursor keys to scroll the desktop beneath them… Happy Days!

For anyone wanting to learn more about this newly improved UI, please join the webinar we’re hosting for a quick overview and Q&A on recently released KNIME Analytics Platform 4.6.0 & KNIME Server 4.15!

Register for the webinar and get highlights on the latest version:

Followed by a summary of the community feedback and a Q&A with our experts, @carstenhaubold and @roberto_cadili. Come prepared with your questions and get a sneak peek into what’s coming next.

The modern ui is quite intuitive and sleek… while geek would find more tools at sight while preparing the work flow. I couldnt find the example workflow link in the modern ui…and how we can open the hub workflows in new ui.

Thank you for taking the time to respond! Adding all my comments below.

Workflow Outline - Yes for massive workflows, it is super helpful for quickly navigating to certain parts of it.

Table Output - I don’t have any science or render use cases, but would be happy to review any new iterations as you work through them.

Favorites - Yes! That would be awesome.