I like the new interface but I think it would be better if it allowed:

1-Copy & paste nodes (or groups of nodes) as this can save a lot of time in some situations
2-adding labels or descriptions for nodes
3-dropping nodes onto the connectors to place the node between two existing nodes
4-an easy way to copy all values from the output of a given node (i used to just open the table, hit crtl+A and then crtl+C, but this no longer works and selecting the whole table manually doesn’t work as well for pasting into excel or google sheets

I love the first steps of this major evolution although it is not yet completely functional.
At first sight, here are some proposals for a future release:

I understand this could be a challange to keep the UI sleek with all this but it may be possible with some activation switches (to activate modifiers when needed) or by making it accessible when making the preview frame larger (higher).

It could also be handful to be able to:

Another cool feature could be to have inline viewers.
Those would allow to view some simple aggregations results directly in the workflow editor without having to open or click on something. Could look like some KPI cards with just and (editable) name and a value. So many time I add some group by nodes that I need to execute and open to control the number of distinct values or some totals or average value…
We could even make it (optionally) auto-executable when input changes. Some auto-formating rules and automatic historisation of the n last values would also allow to highlight exceptions and trends.

What do you think about it?

I agree with you on selecting node. In the meantime, you can use the great actions added by the Vernalis Extension : which are doing exactly what you are looking for (except the trick with the mouse that i’ve seen in another software …)

Hi, the ability to confront visually and to scroll easily over different tables like on the attached picture. 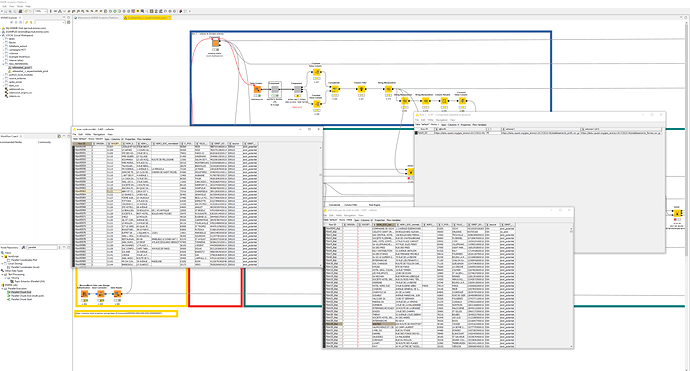 Hi,
great preview. I am missing “Available Renders” option for double values. Right now, all values are shown in full precision, which is great for scientific purposed, but of limited use in the business context.

It looks amazing. But you need to add the possibility to open other workflows. I guess that is just because it is a beta version. Also, please that one can modify the connecting lines. I am obsessed to put the lines that look as organized as I want.

Hi everyone,
I was going through the post of other users and agree with most of the points mentioned. Understand that the UI preview is a start and personally, enjoy the look and feel of the interface.
I am not sure if the point was covered in the discussed commentaries specific to open views. I was not clear on the point around execute and open view discussed previously.

Currently, I prefer the option to run the workflow and have the option to view say running decision tree or scatter plots at my convenience. I did not find the open view option in the new UI and am unsure if the same will be have similar functionality going forward. At times, there is quite a bit of lag between the node execution and view being opened which can be difficult to work with, in case the execute and open view option becomes a standard feature as i seemed to understand from the prior posts.

Thanks to KNIME team and enjoying the KNIME experience. 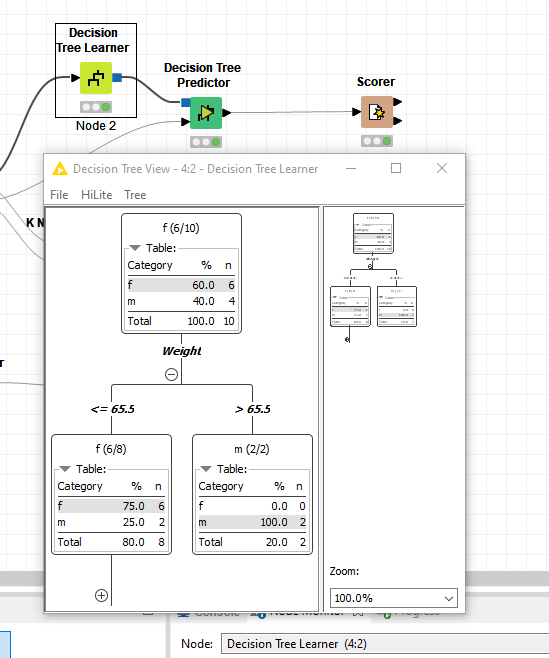 Thanking knime for the new interface, I give the following points as feedback

The new interface needs a more intuitive approach to placing nodes from the repository by drag and drop and by keyboard entry.

Inserting a node into an existing connection by drag and drop is not working on my end. This is crucial and there should be clear visual feedback on the connection line when a node will be inserted into a flow during a drag and drop.

I also don’t see how to access files and components in this new UI. I have said before that I think it would make more sense to allow users to show components in the “Repository”. This would enable some much needed tools for components such as fuzzy search, keyboard placement and give users a single point of access to all of our solving tools.

I use external controllers to insert new nodes from the repository, so this simple UI is particularly appealing to me as I can operate with just a clean view of the Workflow / Node Monitor windows without the need to access the other support windows.

Great to see everyone at the conference.

Just to reiterate on some ideas:

AAAAANNNNNDDDDDDDDD Make the font of all dialouge boxes match the new UI font.

I know that is a lot, but I want to see KNIME succeed in gaining market share. Great to see you guys again. Looking forward to chatting with you soon!

Thought of another thing.

It would be super if changes to variable names propagated to downstream nodes. I know that’s probably a heavy lift, so just a suggestion.

I know I am totally spamming the thread…

Another “cool” thing would be to be able to see nodes that provide or accept ports by clicking those ports on a node in the workflow (with necessary requirements, like if a node needs a URI, only nodes that generate URIs would be listed in “Inputs”).