facing problem in middle of workflow and the problem is i have to use expression with unique rows and lag column(i mean -1 row. )

now the problem is, i have some where around 70K groups and i can use only 1 chuck row for specific groups. so for 70K it will take around 2chatr0 hours. 1 record 1 sec.

is there any other option i can go with

Could you share a small data sample / wf depicting what you are doing?

I have to admit I didn’t completely get it yet
First thought though I had is to increase the RAM that KNIME AP is allowed to use (see the first section in THIS blog post).

Sorry for not being able to explain it to you; however, my workflow is in Alteryx, and I am migrating to Knime. and answer to your question about ram, i have given dedicated 16GM ram to knime.

so basically there are few formula which is being used.

let me try to create a demo workflow

Multi row Alteryx to KNIME conversion was mentioned on the forum some time ago as well.

Hi, I’m new to KNIME and are trying to convert an Alteryx workflow. In my input file I have a list of materials and a creation date. The materials can occur several times in the list but have a unique creation date. I want to create a column ‘End Date’ based on Material and the next Creation Date in the list. If the material only occurs once or if it is the last occurrence of the material in the list, the end date should be NULL. [image] So, for material 000000000017550001 in the example …

Maybe this already helps you further and otherwise indeed a sample with input and expected output.

The forum restricts the size of uploads. It’s best to create a sample workflow with some anonymized data, export it, upload the .knwf and draft your expected output. When exporting, uncheck the option to reset the workflow. 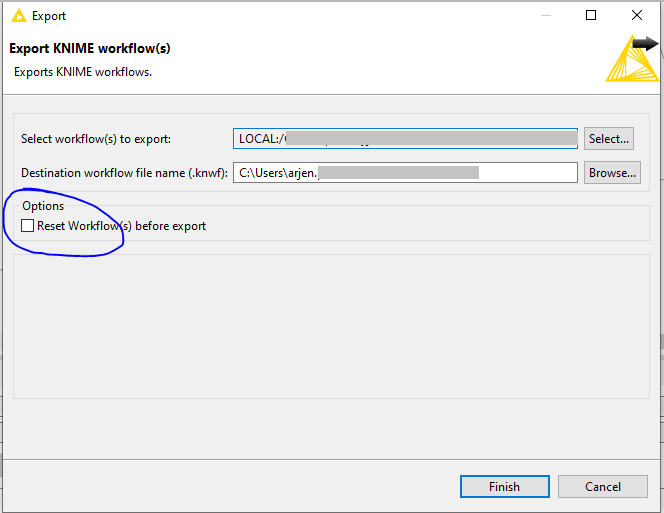 if you want we can connect on call to resolve this

@ArjenEX did you get any solution.

No, I had a look but don’t fully understand what you’re trying to achieve.

Some question that come into mind:

Based on your chunk approach I suspect that you want the evaluate the end dates per group as identified by the Mix column.

Per “Mix” group, the latest end date should be taken and the other row(s) should be updated accordingly? Something like this:

Please provide more guidance and what your expected output is.

or we can get on quick call today?

That can be done with a Group Loop. There are plenty of examples on the Hub but the basic principle is that it will process all rows which belong to the same group as per your selected input column (most suitable memberid or Mix)

Group loop start, each iteration processes another group of rows. The column(s) to group on need to be specified. The input data table is sorted based on the s…

if we use group loop start, it will take somewhere around 10–15 hours to execute the workflow.
may be i am missing out something, that need to be figured it out.
we can not depend on loop chunk or group loop.

please refer to this workflow

@Hammy maybe you could try and formulate your problem again. Do you want to detect the latest date per group? Or is it something else? Also maybe you leave out all columns not necessary to solve the tasks and name the columns you will need accordingly so we might be able to understand.

I’m also a bit unclear on what is being looked for here.

A few general ideas suggest themselves to me:

Thankyou @mlauber71 @justin.m @ArjenEX for your support. We’d try all your suggestions and solutions that are available in the forums.

But the solution that we’re looking for is not available in the forum, and some similar topics are being reported, and those are not helpful, as I have already tried them. I believe this is a new problem that has never been reported.

We were able to solve that problem, but it will take 15 to 20 hours to complete. However, we can’t depend on it. We need solutions that can optimize the workflow; is there any other way we can use it?

FYI: The formulas that we use are complicated.

@Hammy I would still suggest you try and formulate your problem with a clearly described example illustrating what kind of formula you would need.

If pure computing power is the issue you could try parallelization combined with group loop. It might need some experimenting.

Represents the start of a parallel chunked flow. Upon execution, it splits the input data into equally sized chunks and executes the body (terminated by the Pa…

@terbe one idea indeed could be to do this in chunks and control that via flow variables. Though the task sounds large indeed. Could you identify what the bottleneck might be? Is it the network speed or the process on your machine? One idea could be to utilize parallelization if the database connection allows for multiple accesses at once. You also should think about a mechanism to store which entries you already have processed so you could continue at a certain point in case your task fail…

From looking at your original post, it looks like you are trying to do something like “if a row is missing RecordID, increment the RecordID from the previous member of the same group by one, otherwise use 1.”

If so, one of the problems may be that using the row offset in column expression node only returns values from the input table, it won’t return a new column or updated value that happened in the node itself.

Assuming your input is sorted by group, this will return the existing RecordID if there is one. If there isn’t it will return a 1 if it’s the first item in a group, otherwise it will increment the previous row’s RecordID.

The only problem is that if there are multiple missing values, one after the other, it will only fill the first one. But you can use a recursive loop to run the same column expression node repeatedly until every value is filled in. It’s still using a loop, but I’m pretty sure it will be faster than a group loop.

This is what I ended up with:

All the missing RecordID values were filled in after 2 iterations.

You may be able to use a similar approach to make other formulae work.

Depending on what you are trying to do, a Rank node might also be useful. It would let you enumerate items within a group, and you could then perform calculations using those numbers.