I was playing around the String Manipulation (Multi Column) node, and accidentally found that RegexMatcher won’t work when any of the input column has a missing value. 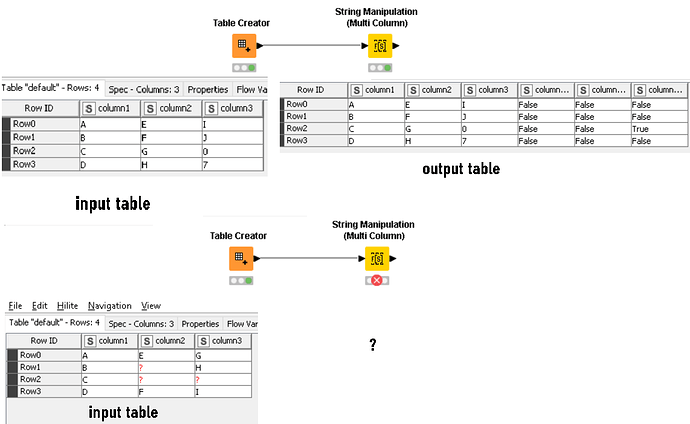 Is this something deliberate in the way the node is developed for this case? If it is, that’s fine with me. Just a weird encounter.

This is a bug which I’ve reported internally. Thank you!

@badger101 , @victor_palacios I’ve found another strange behaviour of a regex pattern in the “Row filter” node.

@duristef Nice. Too bad I cant understand a thing, cause I’m no good when it comes to reading codes/scripts. Haha!

I have looked into the reported bug and found that the error is being caused by the following options set in the “String Manipulation (Multi Column)” node:

This means, missing values (as in your input table, e.g. with Row1, column2) are interpreted as null values. These are different from missing values as they are interpreted as undefined but still worked with in the AP. The node then tries to evaluate these undefined values and fails in evaluating the expression. And because of the second checked option, it causes the entire node execution to fail.
In a nutshell, the node fails by design.

Unchecking the option “Insert missing values as null” should resolve the issue as the node just returns missing values when it sees one and does not try to evaluate it further.

Hi @leon_wenzler , thanks for the solution!