I think I found a bug. Using a “Table Row To Variable”-Node (either the loop or row variant) produces the flow variables, but they’re not accessible in the “Java Edit Variable”-Node.

I produced a minimal-reproducible-workflow, where I compare the new row-to-variable node with the deprecated version:
In the new version, the string and path columns are converted to the respective flow variables, and the iteration variables (currentIteration, maxIteration) are also created as expected. However, in the “Java Edit Variable”-Node configuration, only the string variable is available. All flow variables exist at the JEV output though.
In the old version, all variables are created (except the Path variable, which it obviously doesn’t know how to handle) and they’re available in the JEV. Variables are handed through again.

There might be a reason to hide the path variables from the user, even though the path column behaves like a string column iirc, but hiding the iteration variables doesn’t make any sense to me, so I think this is a bug. I didn’t find anything related to that problem. 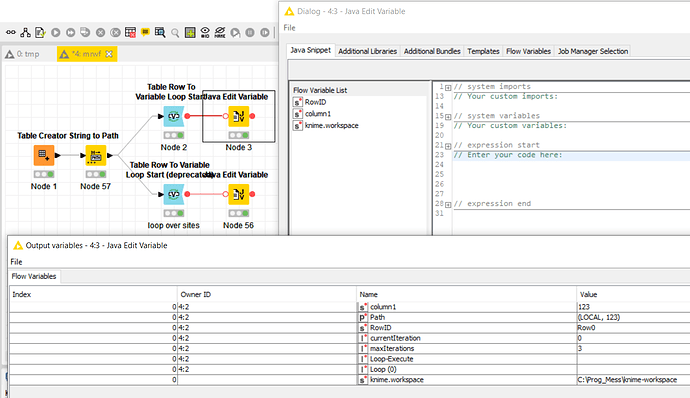 Thx for reporting and we already fixed it. The difference is that the old version of the node returns a integer flow variable while the new one a long variable. The latter cannot be handled by the edit variable node.

Note that this change requires another deprecation of the node

Awesome, thanks for the reply. I’ll just wait a bit longer with workflow updates.