Guys,
I need your suggestion about how to go on.
I have 10 years of Total Agricultural Tractors sales Volumes. I have just 10 numbers (full years)
I need to forecast this year.
I thinking to find 10 years variables in internet like (GDP, Commodity prices, Wheater info, Subsidies and so on.
The variables could be:

Then based on this year variables forecast I want to find this year Total sales volumes.

How I can do? Regression?

@dariobalmas, welcome to the forum.

There could be several ways to do this. We recently had two discussions about regression predictions with historical data. You could check them out and use the accompanying workflows as an example:

I set up an example that should look like your data (if not feel free to adapt and inform). We have two years of data (from one city) and data from January and want to predict the coefficient for Feb 2020. [image] 2019 serves as training and 2018 as test data. You might have more complex settings with cross-validation if you want. And also since you have the data you might provide coefficients of some more past months. Each line represents its own time series so to speak. Of course, such a se…

Can KNIME be used to show the employment and unemployment rate in the UK from the year 2008-2018, showing the prediction for the next year? KNIME Analytics Platform

I set up an environment that first transforms you data from 2008-2016 into a table that has the Area (region) as an ID since I understand that is the unit you would want to predict. [image] The Target is taken from 2017 “Emp UK percent”. If you want Unemployment you would have to change that. The years are transformed into columns, while the first year of the data becomes _0 and the year before that _1 and so on. [image] Then I construct a Test dataset using the data of past 9 years from …

I am try to understand the correlation betweet Target and many variables like this:
Can you help me?

Question is do you want a correlation or a prediction. For correlation there is a node that would give you a matrix, prediction you could follow the last example.

Calculates for each pair of selected columns a correlation coefficient, i.e. a measure of the correlation of the two variables. Which correlation measure is ap… 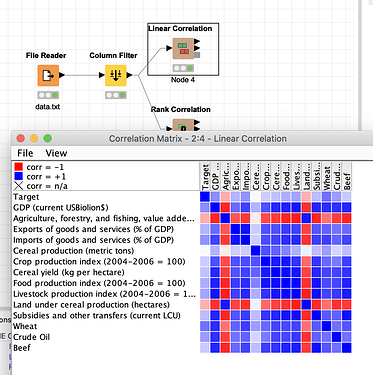 You can see which variables have the strongest correlation with your Target, which would be Wheat, GDP with positive and “Agriculture, forestry, and fishing, value added (% of GDP)” with negative correlation (the larger your target the lower this value). 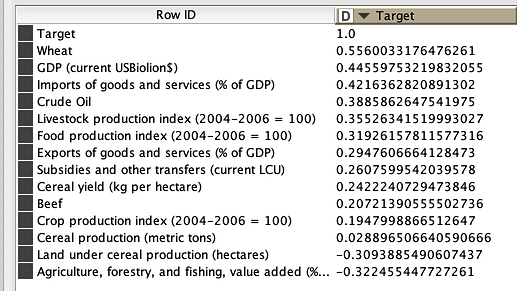 Great
I would like to predict 2020 value target based on p-value/correlation index of variable like GDP.
I have already 2020 GDP (and other variables…) forecast
Does is make sense?
Thanks
D.

Does is make sense?

Well you could try to do that. In this example I have used the data from 2015 and 2016 as test and the rest as training. With the model and the data for 2018 you could also predict the target. You just have to be careful what your target means. If it is the sales from 2018 the question would be when would you know the Target and when the other data. So in oder to make an actual prediction you would need the explaining variables before you would need the prediction (Target).

I the example workflow the best model is H2O GLM. Although the prediction for 2015 is not very good.

And as has been mentioned in the other discussions I referenced. With such few data points and a complicated market it is not so easy to make an accurate prediction. Some additional data might help. Or you could eliminate non-standard years (if there is such a thing).