Start a Workflow, e. g. a database query, after a certain time

@USCHUKN1ME you can put a Loop End at the end where what you want to do is finished. If you do not want to collect data but just to end the loop you could use:

Node collecting variables created in a loop. This node closes a loop but does not aggregate data created in the loop but only variables. It can be used to clos…

Then I would encourgae you to learn about Loops

I set a loop-end node to this position: 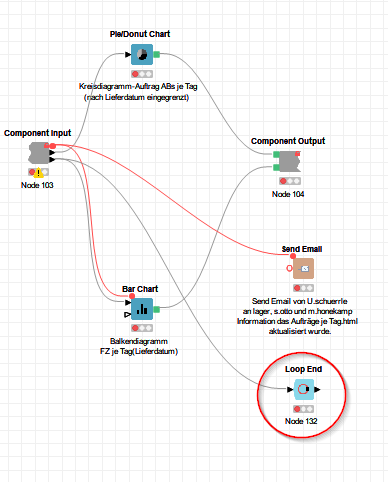 I guess it was wrong

an di have to use the Variable Loop End Node?!

Some of the links are “dead”

In your screenshot the loop end is within the component. Question is if you want that you would want the component to finish. So it might be better to place a Loop End outside.

ok understand.
If I patch the node inside the component, it “only” terminates the component but not the workflow.

But the component is also part of the workflow - where do I set the loop end node correctly then?

@USCHUKN1ME you will have to have everything that should happen within one iteration of a Loop within the loop. If you have a more complicated setting that might involve some trial and error. And you will have to make sure to ‘reset’ scything you want to be new/resetted at the beginning of each iteration. If you want to transfer information from one loop iteration to the next there are the Recursive Loops (which I still somewhat struggle to grasp

If you want to store intermediate information you can -well- save that as a table and read it back in the next iteration (not the most elegant of solutions).

A meta collection about Loops, Paths and Flow Variables in KNIME (and some...

A meta collection about Loops, Paths and Flow Variables in KNIME (and some ZIP files) Start with KNIME's Flow Control Guide https://docs.knime.com/latest/analy…

@mlauber71 thank you, i guess it isn´t easy

PS: Many of the links doesn´t work!

The problem for a beginner, with such large workflows, is to understand why Node A,B,C,… are required for the loop nodes or perform other functions. 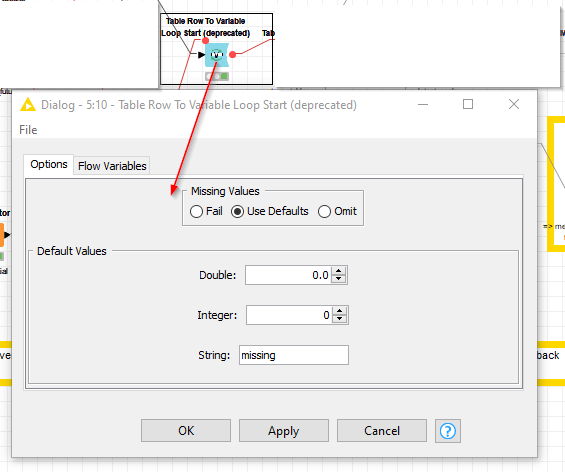 How to arrive at this configuration is not (yet) revealed to me!

I always think of a loop node an if… then… else or a for… to loop.

But I think that’s wrong!

If then else is another matter and there are other nodes for that.

With loops there are tow important End nodes.

My impresssion is that you might want to take a step back to the drawing board and make a plan what you want to achieve and familiarize yourself with some KNIME nodes and concepts mentioned in this thread.

Regarding automation / scheduling you have these options

actually, it’s relatively simple.
I have a database query and a workflow behind it (end with output of a graphic/dashboard + sending an email). I want to restart the database query + workflow at three predefined times without having to manually reset and rerun the individual nodes.

End of the workflow in the component 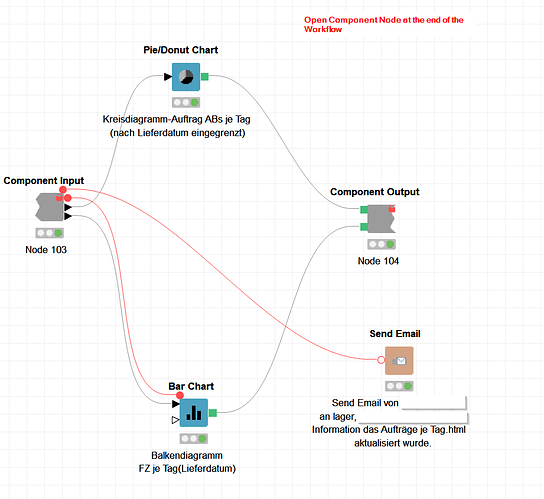 Which loop node is the right one for this ?
Is it the Wait Node with a Table creator Node before?

a wait construction I showed above

Sorry - which one do you mean?

, again via the WAIT node. Have now built something about
the task scheduling of Windows, which Starts a batch file which creates
a simple text file and overwrites each time. I configured the WAIT node
in KNIME to wait for the modification of a file and then execute it. That worked.

I try to start the subsequent wokflow behind the WAIT node via a LOOP node.

Stupid about the WAIT node is, that it is only executable once and cannot be controlled with it.

Or is there any way to control the WAIT-Node?

If anyone here has a bright idea I am very grateful for a tip.

My suggestion would still be to try and put the wait node within the loop and create the times of a day you want it to be executed in a table to control when the loop would continue.

You might want to download the example and maybe try to adapt it so we could try and discuss what you would need.

use the Wait node to execute a database query at fixed times Please note: If the time of day has passed when the workflow reaches the Wait node it will wait un…

You could of course also use a task manager to start a batch file or even start it at several times a day which in any case would need a computer to run continuously which also would be true if you just let the knime workflow wait with the loop.

If you use the batch mode it might be necessary to use a different knime-workspace if you want to use the machine at the same time.

The knime server in a dedicated server would be another option of course.

My first question about your case workflow would be:
What is the function of add_seconds?

@USCHUKN1ME I tried to build a system you might be able to expand and use.

The idea is to have a workflow that would iterate a number of times (v_number_of_intervals) with a set interval (of seconds) between (v_seconds_interval) them. The workflow looks for a trigger_file.csv if this file has changed from the last time the loop has run a component would be executed. If the file has not changed nothing would happen.

Admittedly not the most elegant way but you could build a small automatic execution machine with this as long as your workflow does run.

This might serve as an example how such a thing could work. Obviously it would need some work and one can debate if this is the best way to go forward. I would recommend using the KNIME server instead

use the Wait node to execute a database query at fixed times (execution...

This job m_001 is there to prepare the setting and simulate the changing tigger_file.csv 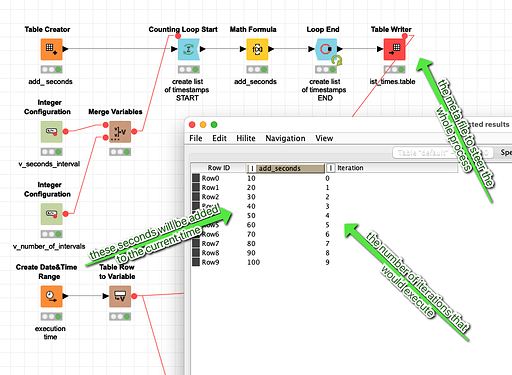 You have three components: 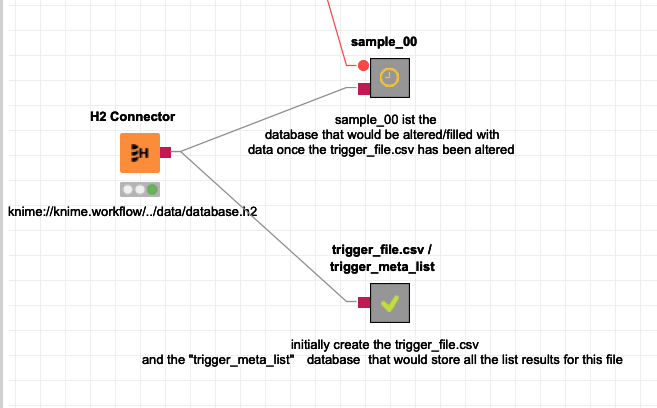 use the Wait node to execute a database query at fixed times (preparation...

use the Wait node to execute a database query at fixed times (preparation workflow) 001 - prepare the meta data and simulate changing files Please note: If the…

wow - thanks a lot @mlauber71 .
I´ll trying to follow your workflow.

In my opinion, an Investment of 12,500 euros for a workflow is
somewhat disproportionate.

@USCHUKN1ME this very much depends on your business model and what you want to do with it. The KNIME server is much more than one workflow

- I have a collection about what is possible there:

KNIME - the hub, the server and general praise and remarks – mlauber71

KNIME - the hub, the server and general praise and remarks A collection of general remarks and praises about KNIME capabilities, strategy and philosophy as wel…

1 Like
Reset Date&Time Configuration , Variables nodes on every execution without manual reset
kienerj February 23, 2021, 7:13am #39

Is it possible to specify several times? Loop?

I know I’m very late to the party and maybe given all the replies after this question my reply might not be needed anymore. Still I think it fits to this question. About “times loops” please look at the vernalis community extensions. Yes, they are in the cheminformatics/life science space but also have some general use nodes like timed loops: 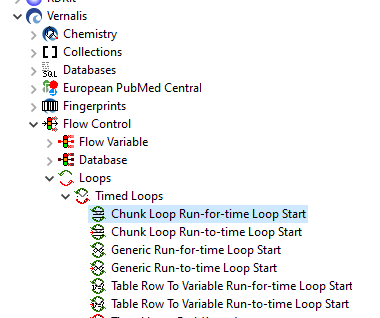 Maybe these can be helpful for your workflow or workflows in the future.

You are not too late 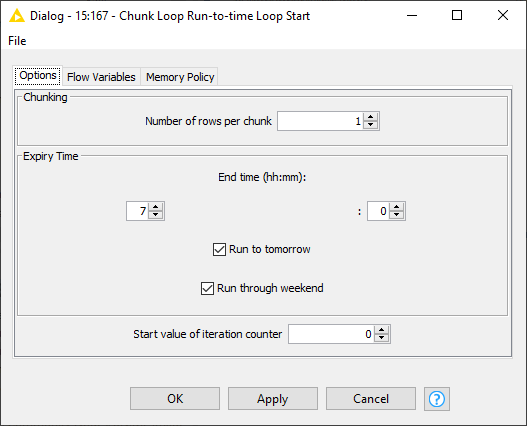 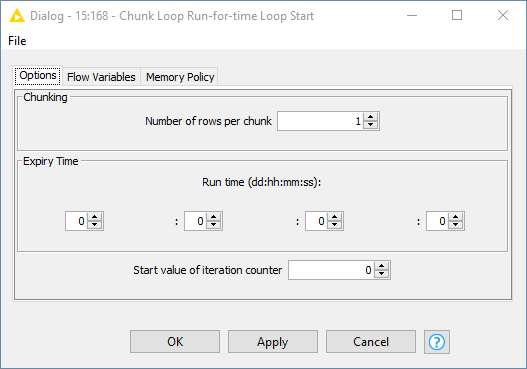 Those are two interesting loop nodes. Which TN take a closer look at.

First, though, l’ll take a closer look at @mlauber71 Suggestion, as it’s
interesting as well.