Hi KNIMERS, kindly help me to remove these icons from my cells (obtained from GetRequest results): 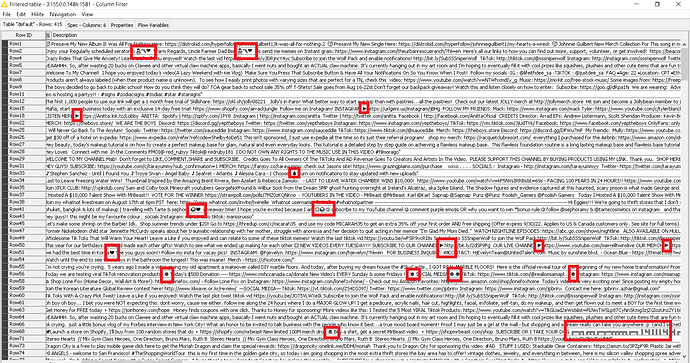 Attempt (1) Manually copied the content to a .txt file ( tesstt.txt (32.0 KB) ) before reuploading to KNIME & choosing all available encoding options but had no luck since the icons were changed to other kind of special characters instead.

Attempt (2) I tried to use the String Manipulation’s URL decoding function after converting the cell content to dummy URL links but I got this error:

@tims you could use a regex function and a “Insert Column Header” node to clear your variable names. The logic is you remove everything that is not explicitly permitted. In this case a blank is OK. You might edit that to your needs. regexReplace($Column Name$,"[^a-zA-Z0-9 ]","") [image]

Hi @badger101 , I think what you are seeing is basically a result of wrong character encoding.

The way I tackled these kinds of issues in the past was to check their hex values in order to identify them, and the remove them.

Alternatively, you can do the other way around, which is to instead identify what you want to keep (which @mlauber71 has already suggested and that you have implemented) and remove the rest.

If you are interested in looking at some sample threads that used the hex values, here are some:

Hi @jorgemartcaam , I put something together that seems to work. Final results: [image] Workflow looks like this: [image] Explanation: First, I strip any leading and trailing spaces, this is a bit important because I am going to deal with regex and also hex values: [image] I then removed the Emojis via a Regex. This is where the main magic happens: [image] I looked at a few documentations and suggestions from other people. Mainly I looked at: https://unicode.org/Public/emoji/13.1/em…

Hi @bruno29a , the first attachment seems to be a proper solution. I would make an attempt on it in the future on a new dataset. Thank you so much! If that thread had a word like ‘icons’ or ‘emojis’ or ‘emoticons’ in it, I would have came across it when browsing through the forum yesterday. But hey, better late than never!

Update: Apologies. Seems that it had the word ‘emojis’ in it. I missed them somehow.

No problem @badger101 , indeed one of the threads that I provided dealt with removing emojis.

The issue with creating an “anything but” list (whitelist) is that you have to include a lot of the accepted characters, which is not easy.

In your case, because what you want to remove are exceptions (and exceptions usually means their numbers should be less that the normal cases), it’s probably best to identify them and to remove them (blacklist)